Sandy Alderson extension transcript
7yAdam Rubin
A fans guide to abiding the LOL Mets
14dDevin Gordon
Jeff Passan answers 20 burning questions about the MLB playoffs
14dJeff Passan
What's next for the New York Mets after Luis Rojas' departure
16dBradford Doolittle and David Schoenfield
Mets move on from Rojas after 3rd-place finish
16d
Mets likely to make Rojas decision before others
21d
MLB Power Rankings: Where all 30 teams stand in the final week
20dESPN.com
Mets give Syndergaard start, shut deGrom down
22d
Your squad isn't going to the MLB playoffs? The No. 1 offseason question for each eliminated team
16dBradford Doolittle
Passan's early MLB free-agency tiers: Which stars are going to get paid this winter?
21dJeff Passan
MLB Power Rankings: Where all 30 teams stand as playoff picture comes into focus
27dESPN.com
Prospects who have taken the biggest step forward in 2021 for all 30 MLB teams
29dKiley McDaniel
Sep 23, 2014

Here's what Wilpon said about reaching the decision:

"On behalf of myself and ownership, we're very happy with the process that's in place, the development of our players and the overall direction we're taking to get to the next level. We want Sandy to continue to explore all the ways to improve the team. He does have payroll flexibility whether through free agency or trades. And we're looking forward to 2015 as well as Sandy's leadership and guidance in getting us to the postseason." 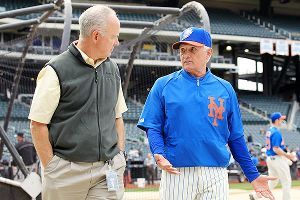 Sandy Alderson and Terry Collins are returning in 2015.

Alderson handled the call from that point. Here are select comments ...

On the positives and negatives of his performance over the first four years:

"Obviously we're not at the point that we'd like to be in terms of our won-loss record and the overall success of the team. I think we've done some things well. I think through the efforts of people like Paul [DePodesta] and Dick Scott, our farm is system has improved dramatically. We have more talent coming into the system. The talent that we have, I think, is being well-developed. We've seen evidence of that at the minor league level and major league level. I think we've acquired some players from outside the organization through trades that again reflect well on our amateur and professional scouting staff.

"Free agency is a crapshoot. On the other hand, you expect to hit a certain number of times. That's an area where hopefully we will continue to be active, but also be more successful than perhaps we've been in the past. From that standpoint, I think the overall direction of the team is pretty good. But we need to translate the progress that we've seen in the organization and across the franchise into more wins. But I don't think we're that far away. I really don't believe that this is going to take a giant leap to get to a playoff-competitive level. And I hope I'm right about that."

On Terry Collins remaining manager in 2015:

"He's done an exceptional job for us, I believe. He's energetic. He's passionate. His work ethic is second to none. And I think this translates extraordinarily well into his leadership of the team. I think our team continues to play hard, has from the beginning of the season. I have no doubt it will continue through the next six games. It's been a pleasure to watch how the team has responded to Terry. I'm very pleased he's going to be back with us. We're fortunate to continue to have Terry into 2015. ...

On Collins not getting an extension:

"Look, we're focused on 2015. Terry does have an option for 2016. That has not been exercised at this point. But I don't believe that will have any impact on Terry -- how he's viewed by the front office, his relationship with the players. I was in a similar situation, I guess, at the beginning of this season. It doesn't have to be a factor. I'm very pleased Terry is coming back and I look forward to good things in 2015."

On whether he received any assurances a payroll spike is possible, or whether it will resemble the past couple of years:

"The short answer is I don't know if there will be a dramatic spike or not. But I will say this: I don't feel that we will necessarily be constrained by the payroll next year. Recently I said, look, that we have seen the emergence of a number of good young players. We have to decide whether they're good young and play0ff-caliber players. We have to measure that, and compare that to what's available in the free-agent market, what's available in the international market, what's available in the trade market. I feel as if we've got plenty of latitude in looking at all of those areas. But again, as I go back to what I said earlier, I think with the player-development side we've done pretty well. We've done decently in trades. Free agency is problematic, and not just for us -- for a lot of teams. We're going to explore all of the options and see where it takes us. It may take us a while during the course of the offseason to full explore what those options are."

On what the team needs to add this offseason:

"Without sounding evasive, we have to improve the team by 10 wins, 12 wins. There are a number of ways to do that. It's not just a question of promoting young players or making a trade or signing a free agent in any particular area. I know left field and shortstop have been mentioned, but the overall goal is to improve the team. We need to make sure that we maintain the improvement that we've seen in the bullpen. We need to make sure we don't give up anything in our starting rotation. And we've got to be more productive offensively. But there are a lot of ways to get there. I wouldn't identify one position or two positions. I just think the improvement on a 'net-net' basis has to be there. If we have to subtract from one area to add to another, that's certainly a possibility. But I don't want to get too bogged down in too much specificity now because you don't know what opportunities are going to arise over the course of the offseason that might take you in a slightly different direction."

On the size of the gap between the Mets and Nationals:

"At this point the Nationals are the measure by which we're all evaluated in the National League East. And our record against them this season has not been very good (3-13). They have a quality player at virtually every position. Their rotation is excellent. They've got a great bullpen. I think [GM] Mike Rizzo and the Nationals have done a terrific job. And that's where we have to get. And frankly their probably the best, or one of the two of the three best teams, in all of baseball -- certainly in the National League. That's the level to which we have to aspire. But if we improve by the range I mentioned earlier [10-12 games], there's no reason why we can't be there. Things change from year to year. One of the things I like about our situation is I'm not sure you can point to anybody on our team who has clearly had a career year. I believe there's lots of potential within the player group that we have right now to close the gap. But ... they've set the standard. That's what we need to achieve."

On the coaching staff's status:

"We'll make a decision and have an announcement on the coaching staff very shortly after the end of the season. One rumor I would like to debunk is the possibility of Tim Teufel becoming the hitting coach. That's not something that we're contemplating. Tim does a very nice job for us at third base and with the infielders. I wouldn't anticipate a change in responsibility."

On whether Wally Backman is a candidate to join the major league staff:

"I'd rather not comment on any specific individuals. We'll make a statement at the end of the season if we have openings, and whether we've immediately filled those or not."