NEW YORK -- The Mets believe they will contend next season, fueled by dominant young arms including Zack Wheeler and Jacob deGrom as well as the reintroduction of Matt Harvey and Bobby Parnell following Tommy John surgeries.

It’s no secret, though: GM Sandy Alderson clearly has to upgrade the offense.

Yet, perhaps counterintuitively, at least one popular and productive batter may be on his way out if the right deal presents itself.

The Mets have showed no inclination to engage Daniel Murphy's representatives in extension talks. And there is a strong possibility Murphy will get traded this winter, especially if a team in need of a first or third baseman is willing to offer a comparably valued outfielder with some power. 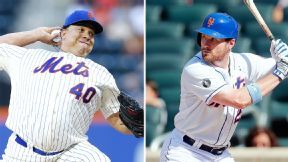 Bartolo Colon is actually less likely to be traded this offseason than Daniel Murphy.

One major league executive suggested the Mets might be able to get the same -- or more -- for Murphy by waiting until the July 31, 2015 trading deadline, when Murphy’s $8 million to $9 million salary will be more palatable and a team might be aggressive in needing to rent a player. Still, it appears the Mets are more likely to deal Murphy this offseason. After all, it would be difficult to subtract Murphy in late July if the Mets are in contention, as they expect to be.

Internal candidates exist to take over at second base for Murphy -- with Wilmer Flores having looked comfortable there, and Dilson Herrera and Matt Reynolds also MLB-ready, or very close. Ruben Tejada could slot in as a backup middle infielder in that scenario.

Flores, like Kirk Nieuwenhuis in the outfield, will be out of options in 2015 and cannot be sent to the minors without being exposed to waivers. As a result, Flores should be on the Mets in some capacity, including potentially as the starting shortstop if Murphy remains.

The Mets undoubtedly will investigate external shortstop options, including revisiting potential trades with the Cubs or Diamondbacks, plus deals with any other teams. Still, no one is expecting the Mets to be willing to package multiple higher-level prospects, such as Noah Syndergaard, Rafael Montero and Kevin Plawecki, in order to pull off a deal for a blue-chip young shortstop (or outfielder, such as Yoenis Cespedes). So the expectations trade-wise should be more modest. Free-agent-wise, the shortstops include J.J. Hardy, Jed Lowrie, Asdrubal Cabrera, Stephen Drew and a way-too-pricy Hanley Ramirez.

With Harvey slated to return, the Mets obviously have a surplus of starting pitching. And while that very easily can become depleted through injuries, the expectation is the Mets -- while not giving away a starting pitcher -- will find an attractive offer for Bartolo Colon, Jonathon Niese or Dillon Gee.

The external perception might be that Colon is the most likely to be moved since he has one year remaining on his contract at $11 million, but that’s not necessarily true. Colon is capable of logging 200 innings next season, despite turning 42 years old, which would be helpful. And the Mets might find a more attractive offer for Niese or Gee, both of whom have relatively team-friendly contracts. So look for one of the latter two pitchers to be traded, rather than Colon.

Niese, albeit the lone southpaw in the rotation until prospect Steven Matz is deemed ready, is due to earn $7 million in 2015 and $9 million in 2016. A couple of team options, at $10 million and $11 million, follow.

Gee earned $3.625 million in 2014 and is again eligible for arbitration this offseason. He remains under team control through the 2016 season.

One hot topic with the Mets is always payroll, especially after it dipped to roughly $85 million this season.

Team insiders note the payroll is not going to spike to $130 million this offseason, but they insist there is upward mobility. Of course, given all the raises owed to players, the 2015 payroll will be about $93 million before the Mets have any winter activity.

The educated bet is that the payroll flirts with $100 million in 2015, with spending offset by reductions, such as a trade of Murphy and an established starting pitcher.

Although Alderson “likes to zig when everyone thinks he’s going to zag,” according to one Mets insider, don’t look for long-term free-agent deals from the Mets this offseason. That’s as much due to Alderson’s aversion to long-term commitments as to payroll constraints. The Mets desperately need an outfield power upgrade, but a six-year, $100 million commitment to Cuban defector Yasmany Tomas just isn’t going to happen. The Mets, in general, are gun-shy of longer deals given how Jason Bay and now even Curtis Granderson worked out.