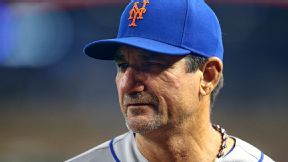 NEW YORK -- Former Mets hitting coach Dave Hudgens has been hired by the Houston Astros for that role.

Hudgens was fired by the Mets on May 26, during his fourth season on Terry Collins' staff.

Lamar Johnson, who finished the season as Mets hitting coach, will be reassigned to the minors. The Mets reportedly have expressed interest in Dave Magadan and Kevin Long.