PHOENIX -- With Michael Cuddyer signed to a two-year deal, the Mets now turn their attention to shortstop as the primary area to upgrade. They also are in the market for a left-handed reliever and utility infielder, according to industry sources.

A trade for Troy Tulowitzki is "not happening," sources briefed on the matter told ESPNNewYork.com, but the Mets do plan to go the trade route in order to try to upgrade at shortstop. The Arizona Diamondbacks, Seattle Mariners, Chicago White Sox and Chicago Cubs are viewed as four viable trade partners. A deal for Tulowitzki is not on the Mets' radar because of the $100 million-plus still owed as well as the expected cost in terms of prospects (two or three blue-chippers). 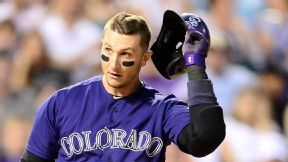 The Mets, very possibly, will acquire a shortstop, but sources say it won't be Troy Tulowitzki.

The Mets are unenthusiastic about the free-agent shortstops available (Asdrubal Cabrera, Stephen Drew, Jed Lowrie). And because they were able to acquire a starting outfielder on the free-agent market and did not have to part with any prospects, it makes the ability to acquire a shortstop via trade that much more viable.

Daniel Murphy's future with the Mets heavily depends on how the Mets address shortstop. Murphy, who is due to make roughly $8.1 million in his final season before free agency, likely will remain a Met in 2015 if the team is unable to acquire a shortstop and uses Wilmer Flores at the position, or if the Mets acquire a defensive-oriented shortstop (think Arizona's Didi Gregorius). If the Mets are able to land a shortstop with a more potent bat (think the White Sox's Alexei Ramirez), then it is more likely they deal Murphy.

Of course, that requires getting a quality offer for Murphy, which has been an issue in the past.

There only are believed to have been preliminary conversations with teams so far regarding Murphy. And, unless the Mets are bowled over, his fate will likely wait to be determined until the shortstop situation is resolved.

As for the backup infielder, that actually could end up being Flores if the Mets acquire a light-hitting defensive shortstop and decide to keep Murphy.

The other heavy lifting the Mets will need to do this offseason is making Dillon Gee, Jonathon Niese and Bartolo Colon available and seeing which one commands the most relative to their value. It's conceivable that deal would package a prospect, too, in order to acquire a shortstop or address another need.