SCOTTSDALE, Arizona -- Matt Reynolds has demonstrated to the Mets he can handle shortstop.

“I base that partially on the fact that nobody in our organization has leaked the possibility that he can’t play shortstop,” GM Sandy Alderson joked Thursday, before Reynolds and other Mets prospects completed their Arizona Fall League season at Scottsdale Stadium.

Reynolds hit .234 with three homers and 15 RBIs in 77 AFL at-bats. That came on the heels of a strong regular season, during which the former second-round pick out of the University of Arkansas hit a combined .343 with six homers and 61 RBIs between Double-A Binghamton and Triple-A Las Vegas. 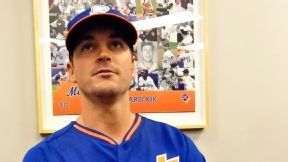 “I feel like I’m pretty close to being ready to play in the big leagues,” Reynolds said. “Obviously there’s still a lot of things that I want to work on and I want to get better at. This year has been really good for me. I’ve gained a lot of confidence from it. And I’ve also seen what aspects I need to improve on a lot. It’ been a fun year and the Fall League has helped out a lot more.”

There had been open questions about whether Reynolds had the foot speed and range to stick at shortstop, but holding his own on the quick Las Vegas infield demonstrated that he can be serviceable there.

Reynolds suggested his hands have “come a long way,” as has his ability to read hops.

“It definitely prepares you for the next level, because the ball is getting on you so much faster. Vegas’ infield is one of the fastest infields I’ve ever played on," Reynolds said. "People told me coming out to the Fall League that it was going to be the exact same. But I’d still say Vegas is a lot faster. You’re playing in the middle of the summer with 115-degree weather and the infield is rock solid. I mean, the grounds crew does a great job of trying to keep it as soft as they can. It helped me a lot. I actually enjoyed playing on it, because it taught me to get ready early and to use my hands. It was very good for me.”

Alderson has bluntly said the 23-year-old Reynolds is ticketed for Las Vegas again to open next season. He is not currently on the 40-man roster because he was drafted in 2012 and does not yet need to be shielded from the Rule 5 draft. That’s one primary reason while Dilson Herrera was called up over Reynolds at the end of last season.

“My approach at the plate, my swing improved a lot this past offseason,” Reynolds said. “It carried over into the season. I made a lot of adjustments of staying through the middle of the field and not trying to pull the ball too much. When you have that approach, you’re able to hit a lot more pitches. I was able to keep a consistent approach for most of the year and it worked for me.”