NEW YORK -- The National Baseball Hall of Fame and Museum will announce its 2015 class of inductees on Jan. 6 at 2 p.m.

Eligible voters who have been members of the Baseball Writers' Association of America for 10 years may select as many as 10 candidates on their ballots.

Those candidates appearing on 75 percent of the submitted ballots are elected.

In a new wrinkle, candidates may only remain on the ballot for as many as 10 years, provided they continue to appear on 5 percent of the ballots cast. That's down from 15 years, although Don Mattingly (15th year on ballot), Alan Trammell (14th year) and Lee Smith (13th year) are grandfathered and remain.

Here is my Hall of Fame ballot. I used all 10 slots I was allotted, and still was unable to fit Lee Smith (whom I voted for two years ago, but now do not have room to include).

First-year candidates Randy Johnson, Pedro Martinez and John Smoltz get my vote. So does Mike Piazza, the ex-Met who garnered 62.2 percent of the vote a year ago -- within striking distance of the 75-percent threshold. The others: Jeff Bagwell, Craig Biggio, Barry Bonds, Roger Clemens, Tim Raines and Curt Schilling.

Raines reappears on my ballot this year. Like Smith, I voted for him two years ago, but could not fit him last year, when the class included players such as now-elected Tom Glavine, Greg Maddux and Frank Thomas.

Other notable players I omitted (for now, at least), include: Jeff Kent, Edgar Martinez, Mike Mussina and Trammell. 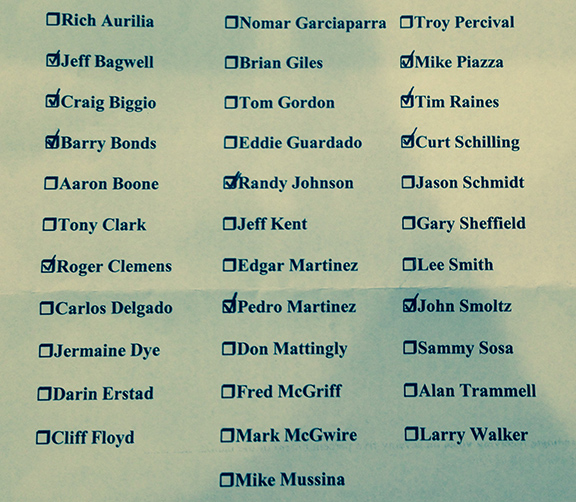