Here's the full announcement from the Mets: 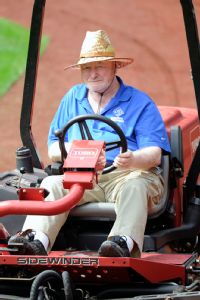 The Major League Baseball Groundskeepers have selected Pete Flynn of the New York Mets and the late Pat Santarone of the Baltimore Orioles as the newest members of the MLB Groundskeepers Hall of Fame. They join previous inductees Emil Bossard (Indians), George Toma (Royals), Joe Mooney (Red Sox), Dick Ericson (Twins) and Harry Gill (Brewers). Flynn and Santarone will be inducted the evening of Jan. 11, 2015 at Coors Field in Denver.

“It’s a huge honor to be recognized by your peers,” Flynn said. “I have a lot of fond memories from my time with the Mets, going from the Polo Grounds, to Shea, to Citi Field. It’s a great way to cap my career.”

Flynn is an ‘Original Met’ who began working on the field during the team’s inaugural season at the Polo Grounds in 1962. Flynn became head groundskeeper at Shea Stadium for the Mets in 1974 and held that position until 2001. For the next decade, Flynn continued as a part of the Mets grounds crew before retirement in 2011. During his career, the Mets were World Series Champions in 1969 and 1986.

In addition to concerts and the NFL’s Jets at Shea, Flynn also handled the unique challenge of the 1974 and 1975 MLB seasons, when the Yankees and the Mets shared the ballpark as Yankee Stadium was renovated. Throughout his career, Flynn made himself available to help local Catholic schools with grounds advice and tool donations. In 2008, Flynn became a member of the Irish-American Baseball Hall of Fame and he was honored with induction to the New York Mets Hall of Fame in 2012.

To be considered for induction to the Major League Baseball Groundskeepers Hall of Fame, a person must have ceased employment in the profession and have made a significant contribution to groundskeeping and/or the sports turf industry at the major league level. An individual’s impact on the community will also be considered. Nominees are submitted to the MLB Groundskeepers Association for a vote. Each team has one vote; a nominee must receive 75 percent of the vote of all active association members.