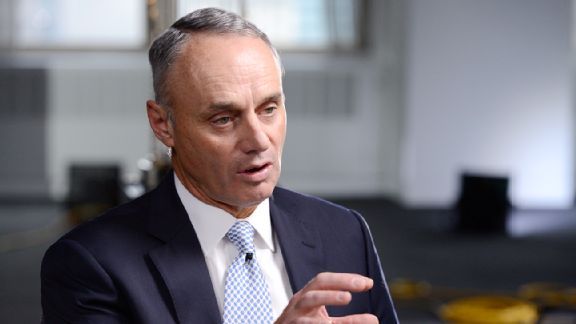 The Mets' payroll has swooned in recent years to un-New York-like levels. It stood at roughly $83 million last season -- in the bottom third of MLB teams -- and currently projects to narrowly crack $100 million this season assuming Dillon Gee is not traded.

"For a whole host of reasons, it's really not my position to predict when I think they need to spend," Manfred said during a visit last week to ESPN's campus. "I have had ongoing, numerous conversations with both ownership and Sandy [Alderson] about the Mets' situation. ... I think at the point in time that it is their judgment that it is effective to increase their payroll, they'll do that, and they will have the capacity to do it."

Manfred's lack of concern about the Mets' spending echoes the statements of his predecessor as commissioner, Bud Selig.

Asked point blank if the Mets have the capacity to boost their payroll now, given their seeming lack of appetite to pursue trades for big-ticket items such as Troy Tulowitzki and Ian Desmond to man shortstop, Manfred added: "I don't know what their internal considerations are with respect to individual trades, and it's not appropriate for me to talk about that. But I have never had a question about the Mets' capacity to spend if they decided it was in their baseball interest to spend money. I really don't believe that's an issue."

Vote 'em in: Asked about his advice to Hall of Fame voters about how to treat bulky players from the steroid era who never were caught by MLB, Manfred left little doubt about his preference: Don't assign guilt based on innuendo and withhold votes.

That could be viewed as an endorsement of candidates such as Mike Piazza and Jeff Bagwell, since neither has been implicated in a steroid scandal, although columnists sometimes openly wonder about how clean they were, such as columnist Dan Shaughnessy in December in The Boston Globe.

"Everyone should keep in mind the difference between players who tested positive and were disciplined on the one hand, and players where somebody has surmised that they did something on the other," Manfred said. "I think, based on what you read in the media, sometimes those lines get blurred. And I think it's really important to keep that line in mind.

"I think it's unfair for people to surmise that Player A did X, Y or Z absent a positive test or proof that we produce in an investigation or whatever. It runs contrary to a very fundamental notion in our society that you're innocent until somebody proves you guilty. ... There are players out there that people talk about where there is literally nothing. They have nothing other than, 'He looked like X.' Trust me, from somebody who has spent a lot of time doing it, you can't decide whether or not somebody was doing steroids based on what they look like. That is not enough evidence to make that determination."

Pay to play? ESPNNewYork.com recently reported that the Mets are charging major leaguers $4,400 and minor leaguers $1,000 to attend offseason workout camps led by Mike Barwis at the team's spring-training facility. The Players' Association has acknowledged it is looking into the cost matter. Also at issue is whether players such as Ruben Tejada feel compelled to attend the "voluntary" offseason workouts in order to avoid being penalized in terms of playing time during the upcoming season.

Manfred intimated that no complaint about the Mets' practices has reached his level.

"I don't know the facts of the Mets' situation," Manfred said. "I do know that there are rules designed to deal with these issues. Usually, if there's a problem, we hear from the MLPBA about it. And we have not had a lot of problems on this issue recently. ... There's rules in the Basic Agreement that have been evolved and negotiated over years about offseason camps. They're designed to strike a balance on the issues that you articulated. It has not been controversial the last couple of years."

Best practices: Concerned about the epidemic of Tommy John surgeries in the majors, including to the Mets' Matt Harvey, Bobby Parnell and Jeremy Hefner, MLB partnered to create a web site, Pitch Smart, in November to provide best practices to youth about preventing elbow injuries.

However, MLB is leaving recommendations for best practices for current MLB players -- such as innings caps -- to individual teams rather than offer suggestions based on shared data.

"We've never had that kind of centralization," Manfred said. "That is an element of competition, right? The clubs make those individual decisions.

"We're comfortable with the idea that the medical and training staffs in professional baseball are of sufficient quality that they're making the appropriate judgments as to how to handle pitchers. All of their interests line up in the right direction. The pitcher wants to pitch. Their club wants them to pitch. Everybody wants the player to be as healthy for as long as he possibly could be.

"We went to the recommendations in Pitch Smart because we were concerned that in the amateur space those interests don't always line up, and that there's not congruity in terms of monitoring. You know, Rob Manfred is playing Babe Ruth on Monday and Legion on Wednesday, and the Babe Ruth guy makes one decision, the Legion guy makes another. Maybe both of those decisions were right, but when you put them together, they're not right."