With the exception of Bartolo Colon, who has been in the Dominican Republic, most relevant pitchers and catchers had been here for a while. But now it’s time to get down to official business at Mets camp.

“Reporting” technically means the player only has to check in, alerting the team that he is in Port St. Lucie.

The first structured workout involving pitchers and catchers is Saturday.

By the way, the forecast calls for a high of only 57 degrees in Port St. Lucie on Thursday, albeit with sun.

• Terry Collins left camp after learning his father, Loran (Bud) Collins, passed away Tuesday night in Midland, Michigan, at age 95. The elder Collins reportedly was a former manager for Dow Chemical. The Mets manager will be absent from the early days of camp. GM Sandy Alderson instead will address the media Friday. Read more in the Midland (Mich.) Daily News, Post, Daily News, Newsday and NJ.com. 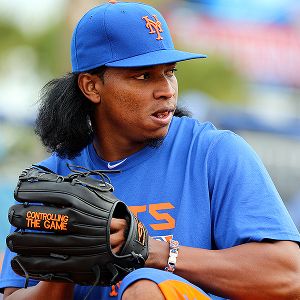 Jenrry Mejia throws off a mound during Wednesday's workout at the team's spring-training complex.

• Bobby Parnell threw off a mound Wednesday for the third time since undergoing Tommy John surgery last April. While Parnell is expected to open the season on the disabled list for two to three weeks, he also expects to regain the closer’s role upon activation. (Watch video here.) Read more in the Journal, Times, Post, Daily News, Newsday, Record and NJ.com.

• Columnist Kevin Kernan in the Post writes: “The Mets have no room for error when it comes to the offense.”

• Mike Puma in the Post has a spring-training primer.

• Despite reports of their involvement, the Mets will not land free-agent left-handed reliever Phil Coke, a source told ESPNNewYork.com. The club had made it clear during a December meeting that the Mets would not be awarding major league contracts in the bullpen. If the Mets carry a second southpaw in the bullpen to complement Josh Edgin -- a big if -- the options apparently are Rule 5 pick Sean Gilmartin, Scott Rice, Dario Alvarez and Jack Leathersich.

• From the bloggers … With the Mets’ depth at reliever, Mets Report suggests not rushing Parnell back. … Mets Bro sees parallels between the Mets and Isles.

YOU’RE UP: Should Bobby Parnell be handed the closer’s job when he returns from the disabled list?