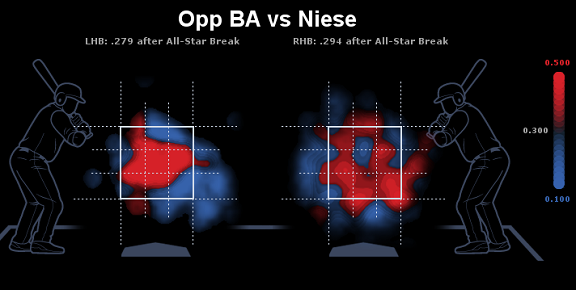 Jonathon Niese struggled in some regards after returning from injury.We'll run through most of the Mets roster for 2015 with a look at the key stats to know heading into this season.

Jonathon Niese's season got off to a nice start. He had a 1.82 ERA through six starts after a run of four straight starts allowing one earned run or fewer.

But Niese hit a bump after he went to the sidelines for 2½ weeks with a shoulder injury just prior to the All-Star break. The injury explained why Niese's average fastball velocity dipped from 90 mph to a less-impactful 88-89.

Niese entered 2014 with a 3-0 record against the Washington Nationals. But that perfection evaporated with three losses and a 5.82 ERA in three starts against them in 2014.

The samples are small, but a number of Nationals have good numbers against him, including Ryan Zimmerman (7-for-17) and Danny Espinosa (7-for-18).

Helping himself would come in handy

Can Niese stay healthy? If he does, the Mets will have some nice depth in their rotation, since Niese figures to be the No. 3 or No. 4 starter in the pecking order.

Niese has never made 30 starts in consecutive seasons. He followed up his first two 30-start seasons with a 26-start season and a 24-start season. He's also never thrown 200 innings in a season, though he has surpassed 185 twice.

It also would be a boon to the Mets if Niese could regain some of the velocity he lost last season.

"Last year I was just trying to find an angle where it didn't hurt," the southpaw said. "This year I feel 100 percent healthy, so I'm able to actually work on my mechanics and have proper mechanics [this spring]."