NEW YORK -- Clearly there's something about Kris Humphries that gets under people's skin.

The crowd booed Kim Kardashian's ex all night, Carmelo Anthony tripped him and Tyson Chandler followed him halfway into the Nets' huddle. 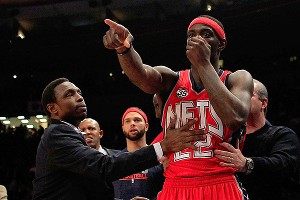 The Knicks downplayed the incidents after the Nets won 100-92 at the Garden on Monday night.

"[It was] just nerves and [being] tired and we just don't like getting beat," Knicks coach Mike D'Antoni said. "Nothing major."

It seemed that the Nets took the worst of the physicality. Humphries had scratches on his face after the game. Nets guard Anthony Morrow lost four teeth to a Melo elbow.

The Nets (10-24) certainly came across the river with an edge. It started with Deron Williams, who recorded 38 points, six assists and a career-high eight 3-pointers. He made a point to stick it to Jeremy Lin, who started his rise to international stardom by outplaying Williams at the Garden on Feb. 4, sparking a seven-game winning streak for the Knicks.

Both Lin and Williams fouled out in the fourth quarter on Monday. Lin finished with 21 points, nine assists and seven boards. 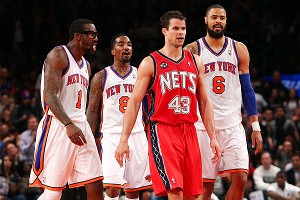 But the game increasingly became physical under the basket. On one play in the third quarter, Humphries (14 points, 14 rebounds) was tangled with Chandler in the paint, positioning for a rebound, and appeared to push him to the ground. Anthony took exception and poked out his leg to trip Humphries as he went downcourt, and was called for a technical.

"It happens in the course the game," said Anthony, who went 4-for-11 with 11 points, six assists and six turnovers in his first game back from a right groin strain. "It happens. I made a mistake and tripped him."

Chandler was bumping with Humphries much of the night. Humphries and Chandler collided twice on one play in the fourth before Humphries was called for an offensive foul. The two started jawing and, after the Nets called timeout, Chandler followed Humphries into the New Jersey huddle and grabbed him by the arm, which earned Chandler a technical.

"I didn’t think I fouled him to start the play," Humphries said. "I just think he was a little overhyped and came over and slapped me on the arm or something. I don't know. It is what it is. We were just playing ball."

Asked if Humphries probably wouldn't meet with the 7-1 Chandler for dinner after the game, Humphries said: "I'll probably see him later. He's a nice guy. Some people might put it on out there, but off the court he's a gentle giant."