From the moment the ball left his right hand, Jordan Farmar had no doubt. It was going in.

"I would've felt hurt if it went out," the Nets' backup point guard said.

The Nets had already blown an 18-point lead to the Clippers on Wednesday and were in danger of losing their eighth straight game at home. So when Farmar caught an "on-time, on-target" bounce pass from Deron Williams and let a wide-open 3-pointer fly from the right wing with less than a second remaining and the Nets down two, almost everyone in the sellout crowd at Prudential Center -- from the players to the coaches to the fans -- desperately needed it to fall.

With 0.2 ticks left, it did. And the building erupted.

Just like that, a 30-point drubbing in Miami the previous evening had been forgotten. 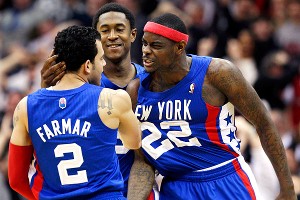 Anthony Morrow and MarShon Brooks celebrate with Jordan Farmar after his game-winning 3-pointer.

"Jordan made probably one of the biggest shots on the court for us this year," Nets coach Avery Johnson said after his team prevailed 101-100 over the Clippers and improved to 4-13 at home -- their first victory at The Rock since Feb. 1.

"In this situation at home in front of a great crowd -- we had a big lead at one point -- but the way this win happened was perfect."

Imagine what he would've said if it hadn't.

"Chris Paul is just dynamite, man," Johnson said. "He basically got me fired in Dallas, if you remember that playoff series, so I had some bad flashbacks."

But "Why Shelden? Why?!" quickly turned into "Thank goodness for Jordan!"

On the ensuing Nets possession, Johnson ran an isolation play for D-Will, but he was trapped and the ball was kicked out of bounds. The Nets got the ball back to their All-Star point guard again and he was thinking about driving, but saw Paul cheating over to help.

Farmar was open. So D-Will fed him the ball -- and Farmar did the rest.

"That was a huge shot from deep," said Williams, who finished with 21 points, 10 assists and six rebounds and improved to 13-4 vs. Paul in his career. "He had ice in his veins."

"I had just passed one up," Farmar said. "I told myself if I get another shot, I'm gonna make sure I shoot it."

"They were cheating a bit and taking [Deron's] space away. He had to bounce it, and he put it in the perfect spot," Farmar said. "I was a little deep, but I just wanted to keep an eye on the rim and stay with my follow-through."

The Nets held an 80-71 lead entering the fourth quarter, but it quickly evaporated because they couldn't buy a bucket. In all, they went 3-for-16 in the final period after shooting a scintillating 58.3 percent in the first half, but made 14 of 18 free throws to stay in it.

And when it was all said and done, they finally gave their fans something to cheer about.

"The Clippers drew a big crowd. It was a home-court environment. It felt like a big game. It was fun to play in." Farmar said. "When it's dead in here and there's not that many people in the crowd, it gets tough at times -- especially when we don't play well, it's hard to keep that energy to get back in the game. But it was a full crowd, the game was going back and forth, and it was fun to be a part of."

"This is the best our fans have been in a long time, and they're definitely part of the win," D-Will added.

And they were treated to a dandy.

The third quarter alone featured 11 straight points by D-Will, three dunks by Blake Griffin (28 points, 17 rebounds) -- including a two-handed alley-oop flush and a baseline reverse throwdown -- and one ridiculous rejection by Kris Humphries to prevent another Griffin oop.

"I needed that," said Humphries, who played physical inside with Griffin all night and both were assessed technicals with 9:08 left in the third. "He snuck one by me at the rim earlier [on the reverse]. It felt good. I think we fed off that and just kept it going."

The Nets are 13-27, but they've beaten Philadelphia in Philadelphia, New York in New York, Chicago in Chicago, Dallas in Dallas and now the Clippers in New Jersey and trail the Knicks by 5½ games for the eighth and final playoff spot in the Eastern Conference with 26 contests remaining. They may be decimated by injuries, but it didn't matter on Wednesday night.

Shelden Williams -- inserted into the starting lineup after Brook Lopez sprained his ankle, causing him to miss at least three weeks -- gave them 15 points, 10 rebounds and a 9-for-11 performance from the free throw stripe. MarShon Brooks -- despite foolishly fouling Randy Foye on a three-point play that knotted the game at 98 -- poured in 19 points. Humphries added 12 points and 11 rebounds, while Farmar contributed 16 of the team’s 34 bench points -- and the biggest shot of the game, if not the season.

"I've been on the bench. I haven't been in game-winning situations too much," Farmar said. "I'm just happy I got the opportunity and it went through for me."