Scout: Votto's the one that got away
9yIan Begley
Re-drafting the top picks in every MLB draft from 2010-2019
3dDavid Schoenfield and Kiley McDaniel
Kiley McDaniel's 2020 MLB mock draft 2.0
5dKiley McDaniel
N.Y. governor: Pro teams can return to facilities
7d
Yankees' Paxton 'full strength' after back surgery
8d
When baseball cards become pop art: Inside the Topps 2020 Project
10dAlden Gonzalez
Biggest needs and best fits: 2020 MLB draft guide for all 30 teams
Arizona Diamondbacks
2dKiley McDaniel
Our first-ever Universal DH Power Rankings for all 30 MLB teams
10dBradford Doolittle
Every AL team's best player not in the Hall of Fame -- and should he get in?
11dJay Jaffe
N.Y., Calif., Texas move toward pro sports' return
13d
Who MLB's most valuable players of the 2020s will be
6dDan Szymborski
Report: MLB eyes $640K loss per game sans fans
15d
Jun 20, 2011 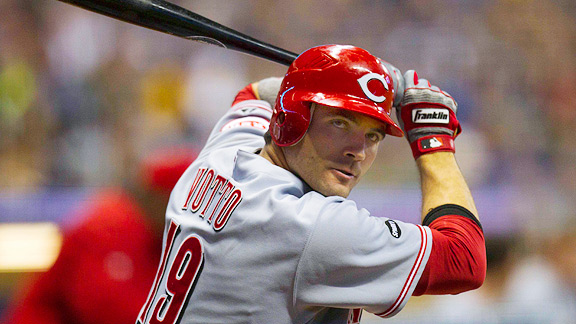 If one scout had his way, 2010 National League MVP would be playing for the Yankees.

If you ask anyone in Cincinnati, Joey Votto looks great in red.

But one former Yankees scout thinks he'd look even better in pinstripes.

According to ex-Yankees scout and current Brewers executive Dick Groch, the Yankees were this close to landing Votto in the 2002 amateur draft.

"If Cincinnati had not taken him, we would have taken him with our first pick," Groch, who also scouted Derek Jeter for the Yanks in the early 1990s, said earlier this month.

Between Groch and his assistant scout, the Yankees saw "every inning of every game" Votto played in high school in Etobicoke, Ontario.

Groch knew quickly that Votto was a prospect. After a while, either he or his assistant were just showing up to games to see if other teams were interested in Votto.

According to Groch, the Yanks and the Reds -- who found out about Votto after he played in a showcase tournament in Florida -- were the only teams high on Votto heading into the draft.

Groch was so high on Votto that he was in his living room on June 4, 2002 -- the first day of the draft -- sitting with Joey and waiting for the Yankees to select him.

Problem was, the Yanks had lost their first-round pick after signing free agent Jason Giambi in the 2001 offseason.

That allowed Cincinnati to swoop in and select Votto with the 44th pick. The Yanks were stuck with pitcher Brandon Weeden with the 71st pick.

“[Votto] was right at the top of our board at the time. In fact, we would have taken him had the Reds not taken him,” said Mark Newman, senior vice president of operations.

Votto won the National League MVP in 2010. Weeden was out of baseball by 2007. Groch was devastated.

“That’s the depressing part,” Groch said. “You sit there so disappointed. … It was that close.”

Votto will take the field Monday night against the Yankees leading the National League in on-base percentage, fourth in batting and sixth in runs scored.

Groch still wonders what the left-handed hitting Votto could do over 81 games in the Bronx.

“Can you imagine him in Yankee Stadium?” Groch said.

Unfortunately for Groch and the Yankees, imagining Votto in pinstripes is the best they can do.