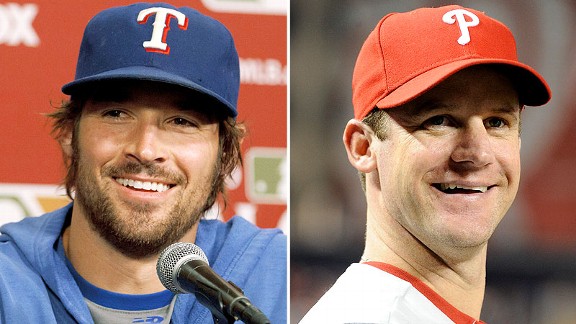 Pitchers C.J. Wilson and Roy Oswalt are big fans of the Big Apple -- at least according to their agent.It remains to be seen how seriously Yankees GM Brian Cashman will pursue Texas Rangers free agent C.J. Wilson and Philadelphia Phillies free agent Roy Oswalt, but one thing is clear from the outset: both pitchers have interest in the Yankees.

Wilson and Oswalt share the same agent, Bob Garber, who described the opening day of free agency as very busy with some “surprising” teams in play. Garber declined to disclose which clubs had called.

Wilson, 31, is considered the No. 1 major league free agent pitcher on the market. He went 16-7 with a 2.94 ERA this past season. He has an outgoing, media friendly personality, which might transition well to the Bronx.

“He is one of those guys, who would fit in there very well,” Garber told ESPNNewYork.com. “He would fit in most places pretty well. New York, I think he would thrive in a city like that.

“His No. 1 priority is that he wants to play for a winning team. The Yankees have as good or better a reputation of that than anybody. It is very early in the process. We’re just waiting and sitting back to see how it plays out.”

Often with the top free agents, decisions are not made until around December’s winter meetings. Garber did not want to put any timetable on the process.

“I don’t have a crystal ball to answer that question,” Garber said.

“It was real close,” Garber said.

Ultimately, the Astros dealt Oswalt to the Phillies. Garber said there is “no question” Oswalt would be interested in playing for the Yankees.

"I know Roy is very good friends with Andy Pettitte and they have talked about the Yankees over the years,” Garber said. “That’s a situation I’m sure Roy would fit in very well, too."

Oswalt is looking for a multiyear contract. Garber said Oswalt’s back is fine.

“It was just a matter of figuring out how to manage his back situation,” Garber said.

A source told Wallace Matthews on Wednesday that the Yankees may be hesitant to go after Oswalt because of his back issues.

The Yankees are expected to have interest in both players, but Cashman plans on being “conservative,” which likely means they will not get into a bidding war for either player; especially if Wilson ends up getting five years and Oswalt receives more than two.

The Yankees could pursue the Chicago White Sox free agent Mark Buehrle and may bid for Japanese standout Yu Darvish. They also may try to retain Freddy Garcia.