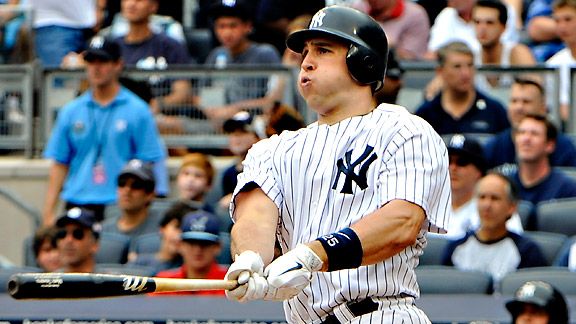 Should Mark Teixeira stop swingin' into the shift and possibly sacrifice power for average this season?25 Questions, 25 Days: Day Seven

We all know the oft-quoted -- and just as often, misattributed -- definition of insanity: Doing the same thing over and over again but expecting different results.

By that definition, some might think Mark Teixeira should be measured for a straitjacket. Because time and again last year, batting left-handed, Teixeira continued to try to pull the ball to right field despite the presence of an army of men with gloves just waiting to gobble up the baseball.

And time and again, Teixeira hit the ball, often quite hard, to right field, only to see it die in the glove of a second baseman-turned-fourth outfielder.

As a result, Teixeira, a career .281 hitter whose batting average as a lefty was a solid .277 in the first eight seasons of his career, plunged to a low of .248, in large part because he hit just .224 as a lefty.

Now, Teixeira is certainly not crazy -- in fact, he has one of the more reasoned and rational approaches to hitting in the Yankees clubhouse -- but even his hitting coach agrees that there is an element of hardheadedness to the way Teixeira resists altering his approach as a left-handed batter.

Teixeira, of course, doesn't want to take a single. He wants to take an aerial tour of the ballpark, preferably landing somewhere in the right-field seats. So time and time again, he has taken his big home run hack as a lefty and come up empty.

Hitting into the shift is like spitting into the wind. And even though his face is getting wet and he knows it's not raining, Teixeira continues to try. Asked about it last season, Teixeira shrugged off the suggestion to try and dump the ball into left or even drag a bunt up the third base line when he sees five men on the right side of the field.

"You don't want to make me into a slap hitter,'' was his stock response.

And certainly, he has a point. Batting average is in many ways a misleading indicator of a hitter's productivity. Despite the futility indicated by his BA, Teixeira still collected 24 of his 39 home runs and 69 of his 110 ribbies batting left-handed.

"His power is to the pull side, which is why he's reluctant to go the other way,'' Long said. "I think he needs to learn to hit the ball up the middle or the other way, because if you consistently hit into the shift, there just ain’t no holes. It’s something he’s got to work on.''

Still, Long agrees, "It is going to affect his power. There's a fine line there and I don’t have it totally figured out yet. There's got to be a little give-and-take. He’s going to have to change his routines a little. it's something we’ll work on in spring training.''

The question is, does it really matter if Teixeira hits only .250 while belting 40 home runs and knocking in more than 100, as he has for each of his last eight seasons?

Long doesn't necessarily think so. "What if we get his average up to .304, but those homers go down to 25 and those RBIs go down to, say, 96? Do we really have a better player?''

No, it sounds as if the Yankees would have a less productive player.

And that, truly, would be my definition of crazy.

But what do you think? Would you like to see Teixeira sacrifice some power to hit for a higher average? Or are you OK with Tex just the way he is? Let us know in the comments section.

Tomorrow: How high can Cano go?