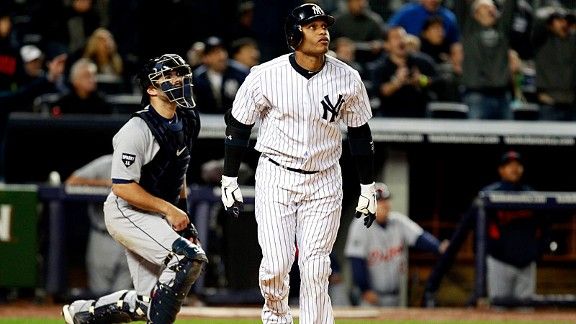 Despite his numbers, Robinson Cano regressed in some ways last year. How will he fare in 2012?25 Questions, 25 Days: Day Seven

It is fairly easy to make the argument that Robinson Cano doesn't need to get any better than he already is. Two years ago, he had a breakout season, and his numbers -- .319/29/109 -- established Cano as a legitimate MVP candidate. On a team built around offense and boasting the likes of Alex Rodriguez, Mark Teixeira and Derek Jeter in the starting lineup, Cano was widely considered the best hitter on the team.

His 2011 season was almost as good -- .302/28/118, a career high in RBIs as well as a career high in runs scored, 104. Still, there was no question that Cano had regressed in certain areas, notably plate discipline and consistency, and his position as the team's most dangerous bat was usurped in some minds by that of Curtis Granderson.

It resurrected the old question about Cano, one we thought had been laid to its final rest in 2010. Namely: Will Cano's performance ever truly match his seemingly limitless potential?

Cano has a gift for making baseball look so easy it sometimes appears he is playing second base while lying in a hammock. There is nothing wrong with that -- Willie Mays made it look pretty easy, too -- and there no longer are any questions about Cano's work ethic.

But an area of real concern continues to be his pitch selection at the plate, which accounted for some significant changes in his line for 2011, and they were not improvements.

For one thing, after holding his discipline throughout the entire 2010 season, Cano slipped back into some old habits in 2011. He swung at more pitches than any other Yankee. In fact, according to FanGraphs, he swung at a higher percentage of pitches out of the strike zone than all but six other major leaguers, including such world-class free swingers as Vladimir Guerrero and Alfonso Soriano. On the positive side, he struck out fewer times than all of them but Guerrero, who is in the process of hacking his way to Cooperstown.

And among Yankees regulars, Cano swung and missed fewer times than any of them other than Jeter. Clearly, Cano is a latter-day Yogi Berra in that respect. He knows what he likes and he swings at it. It worked out pretty well for Yogi.

"He was less selective at times,'' said hitting coach Kevin Long , who had predicted Cano would hit 40 home runs before the 2011 season. "It was a struggle to get him back in the strike zone at times. If there's any improvement he can make, it's in his consistency. I'd like to see him be more disciplined at the plate, and I'd just like to see him be the same hitter month after month after month. I'd like to see six great months instead of four great ones and two mediocre ones.''

As for the 40 home run prediction -- Cano laughed and shouted "Hell, no!'' when asked about it last spring -- Long said he still believes it's possible.

"This guy's got a world of talent,'' Long said. "I know [40] is a pretty high number and he's never been there, but I think he can do it, and deep down, I think Robbie believes he can, too.''

The Yankees are likely to show their belief in Cano this season by batting him third in the lineup at least some of the time, and eventually the plan is to flip-flop him and Teixeira.

The three-hole, of course, has traditionally been reserved for the best hitter on the team. Robbie Cano looked like that guy two years ago. This will be his chance to prove he still merits the title.

How high do you think Cano's ceiling is? Forty homers? 130 RBIs? And where would you bat him in the lineup?

Tomorrow: Should the Yankees actually be spending MORE money, not less?