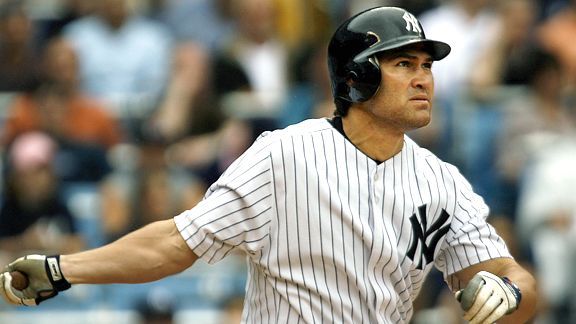 Nearly a month ago, we told you that if the Yankees were to add a DH, it would be “late and cheap,", according to a source.

Well, it is late so the Yankees are halfway there. Now, they are just waiting to see who will accept the cheap. The three main candidates to come to the Bronx are Raul Ibanez, Johnny Damon and Hideki Matsui. They are all in the aisle in the free-agent market as older players who could be good fits for the Yankees as part-time, left-handed DHs.

Against left-handed pitching, Derek Jeter and Alex Rodriguez can DH more with Eduardo Nunez getting more playing time in the field. Against, righties, Ibanez, Damon or Matsui could get the call a lot of days and nights this summer.

Me? I would go with Damon because he gives the Yankees power, with an added element of speed. And, most importantly, he plays.

“That is a tough one,” an AL scout said when presented with the three options. “Based on their versatility, I almost take Damon because he has remained the most healthy.”

The Yankees’ philosophy on guys at the end of the bench is to take chances on players a little past their prime because they have more to recapture or, even if their skills have diminished, they still have more left. With Damon, there is a very good chance he is going to be healthy, even if he is in his late-30s.

Ibanez played 144 games last season and has been a healthy player for much of his career. Matsui, with his bad knees, is definitely a question mark health-wise.

While all three would be asked to be part-time DHs, the ability to play the field is important.

“None are good defensively at this point,” the scout said.

The scout rated Damon the best of the three. So Damon gives you health and a little more defense. He also gives you basically the same power, but more speed.

It is known that Damon, 38, can handle New York. Ibanez, 39, is said to have the right demeanor for the Bronx. But he has never played here.

Ibanez would not be a bad choice; Damon would just be a better one.

What do you think?