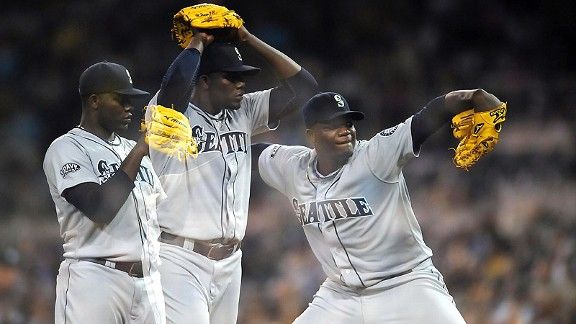 Will Michael Pineda be the Yankees' No. 2 starter in the playoffs this year?25 Questions, 25 Days: Day 16

The GM talked about the wipe-out slider. He spoke about the great demeanor. He said of every pitcher that changed teams this offseason, Michael Pineda is the one he would want the most.

“If I could have the next five years of any of the guys who changed teams, I would take Pineda,” the GM, who requested anonymity, said.

“With Seattle, he pitched as a two,” an AL scout said. “With the Yankees, he’ll pitch as a four.”

In a conversation with Wallace Matthews, pitching coach Larry Rothschild wouldn’t declare where Pineda will pitch in the rotation.

“He’s a young kid so I don’t know if we want him coming out second or if it’s beneficial to have somebody else do it,” Rothschild said. “[Ivan] Nova had a fine year for us, so he could be in that spot.”

Pineda, just 23, almost definitely won’t be the No. 2 starter to begin the year. The Yankees will want to temper expectations considering the pressure of being traded for Jesus Montero is on Pineda’s right shoulder. So Pineda probably won’t be on the mound that first weekend in Tampa.

His debut will likely come in Game 4 of the regular season in Baltimore.

Last year, Pineda was 9-10 with a 3.74 ERA. But at the break, he was an All-Star, going 8-6 with a 3.03 ERA. He struggled in the second half, so even though most baseball people liked the trade for the Yankees, there were some reservations.

However, imagine this: If the Pineda-Montero deal was made at last year’s break, there would be no one questioning it. At that time, Montero, if you recall, was struggling at the plate and there were concerns about his concentration.

When I went to visit Montero in late June, I led with this about Monetro:

The future of the New York Yankees received a two-game timeout earlier this month because the organization felt his play lacked "energy," according to one club official.

The future of the Yankees has hit just five home runs all season, which is miniscule when compared to the output of Triple-A Scranton teammates -- and borderline prospects -- Jorge Vazquez (20) and Justin Maxwell (16).

Montero then came on and ignited the Yankees late in the year. But, although the Yankees still think highly of Montero, they had not forgotten that his concentration didn’t always match his talent.

Pineda has warning signs, too. In the second half, Pineda went 1-4 with a 5.12 ERA. ESPN Stats & Information researcher Mark Simon writes:

Pineda’s opponents batting average against left-handed hitters rose from .201 prior to the All-Star break to .302 afterwards.

Rothschild said, “Part of it is a young guy adjusting to the major leagues and the innings and the workload and all that. I think going through teams a second and third time around changes things and you always have to make adjustments. He’s got the stuff to do that. I think it’s a combination of a few things.”

But here is the thing: Pineda has, as one scout, sounding like the chorus, put it, “front of the rotation starter” stuff.

He showed it last year, striking out 173 and walking just 55. It was the ninth best strikeout-to-walk ratio since 1900 for a 22-year-old or younger pitcher who threw at least 100 innings in their rookie season.

So even if the Yankees don’t want to keep the expectations high, they will be through the roof. In the end, it doesn’t matter if Pineda starts Game 2 of the regular season -- the Yankees may need him for Game 2 of the ALDS.

What is your take? How good will Pineda be? Will he be the Yankees' Game 2 playoff starter?

Tomorrow: What impact will the extra wild card have?