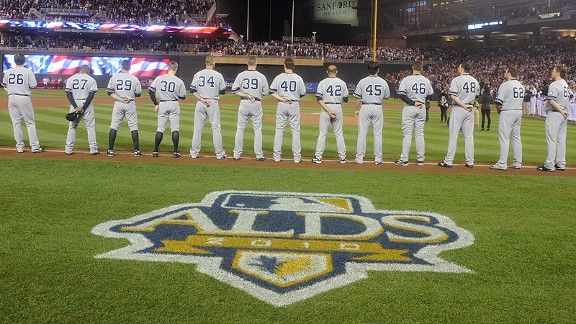 The nightmare scenario for the Yankees would come in early October. After winning 98 games, they finish in second in the AL East and are forced to play a do-or-die playoff game against someone like the Angels.

The Angels, winners of 90 games in the regular season, come into the Bronx and beat the Yankees.

Just like that, the Yankees' season is over before the playoffs barely even start.

The outcry, over the new setup, would be immense

That is one of the great impacts of the new second wild card in each league could have if it is implemented this year. An official decision on this season should be forthcoming soon. Either way, it will be the format come 2013, at the latest.

What the new wild card does is adds greater importance to the regular season. There will be no choice, but to go all out to win your division.

Yes, there are two safety nets, but the wild card puts teams at a severe disadvantage – not the least of which is one club will be one and done.

While we painted a worst-case scenario above, there could be a huge advantage for a Yankee team that doesn’t appear to have any severe holes from 1-through-25 and is certainly the favorites in the AL East.

If they win the division and have the best record, they very well could face the winner of the wild card game, which would likely mean a team that has to play its way into the playoffs down the stretch and then win a game for the privilege of coming to the Bronx. That would seemingly be a huge advantage.

The emphasis on winning the division is one thing, the other aspect of the extra wild card is that the trade deadline will change because more teams will be in it in July and through September.

ESPN, using AccuScore, did a study and found that under the old system, only 11 teams, on average would likely be five games out or better on Sept. 1st. With the additional wild card, that number shoots up to 18 teams, nearly two-thirds of the clubs.

This will change how clubs handle September as they will not look at young players if they feel they still have a chance to make the playoffs. They will focus on winning, not developing. It figures to create more excitement in more cities.

The nightmare scenario painted at the beginning of this blog will become the talk of October in New York if the Yankees were to be the first wild card and the first team to leave the playoffs.

All in all, what do you think? Do you like the impact the new wild card could have on the Yankees or not?

Tomorrow: The tale of Joba