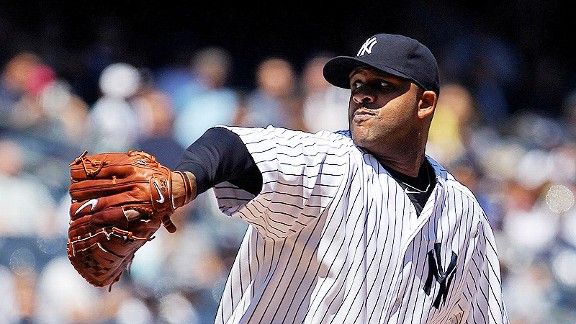 CC Sabathia went 2-0 with a 1.13 ERA and 15 strikeouts in 2 starts this week.Our weekly look at the good, the bad, and the ugly in Yankeeland. Many thanks to the wonderful Play Index at Baseball-Reference.com for several of these notes.

The Yankees finally picked up their first win versus the Rays this season on Tuesday night, snapping a 7-game losing streak against their AL East rival dating back to September of last season.

BRONX BOMBER OF THE WEEK

Raul Ibanez sparked the offense with two homers and three RBI. He is the fourth Yankee with a multi-homer game at the age of 39 or older, joining Babe Ruth (1934), Enos Slaughter (1959) and Jorge Posada (2011).

Less than a week into the A.M. era, the Yankees got a taste of the uncertainty that the other 29 major-league teams experience in the ninth inning when Robertson (in his second save opportunity) couldn’t preserve a 1-0 lead on Wednesday night, sending the Yankees home with a shocking 4-1 loss.

B.J. Upton tied the game with a bases-loaded sacrifice fly and then Matt Joyce won it on a three-run homer, just the second home run allowed by Robertson in his last 99 appearances. According to ESPN's Home Run Tracker, Joyce's 359-foot longball would only have been a homer in Yankee Stadium.

BRONX BUMMER OF THE WEEK

Relax, Yankee fans, the good news coming out of this game is that Robertson's meltdown is not unprecedented – Mariano has done it before:

• Did you know that Mo blew three of his first six save chances in his first full season as the closer in 1997?

CC Sabathia tossed two gems this week going a combined 2-0 with a 1.13 ERA and 15 strikeouts in Friday's win over the Royals and Thursday's victory over the Rays.

Against the Royals, Sabathia had excellent command of his fastball, throwing a season-best 74 percent of his fastballs for strikes. He threw eight heaters on the black, matching his most in a start over the last two seasons.

LEADERBOARD OF THE WEEK

Most Strikeouts with Slider
This Season

Sabathia showcased his best off-speed stuff against the Rays, who went a combined 1-for-11 with seven strikeouts in at-bats ending in a slider or changeup.

Six of those strikeouts came against a slider, the sixth time in seven starts this season he has gotten at least five strikeouts with his slider.

After a lackluster 5-1 loss on Saturday, the Yankee bounced back Sunday afternoon with one of their best offensive efforts of the season in a convincing 10-4 win over the Royals. Robinson Cano broke the game open with a grand slam in the third inning, doubling his season RBI total and home run total with that single swing.

Phil Hughes pitched his best game of 2012, allowing three runs in 6⅔ innings with seven strikeouts and one walk.

Hughes had success working away against the Royals, throwing a season-high 59 percent of his pitches on the outer third of the plate or further outside. The Royals were hitless in six at-bats ending in a pitch away from Hughes and fouled off 15 of the 21 swings they took against pitches in that location.

JETER STAT OF THE WEEK

On Wednesday Derek Jeter went 1-for-4, recording his 50th hit in the season's 30th game. Jeter is the first Yankee in franchise history to reach 50 hits within the team's first 30 games, according to the Elias Sports Bureau.

Elias also tells us that Jeter became the oldest major-league player since 1900 to record 50 hits through his team’s first 30 games of a season. He broke the record set by a 37-year-old Stan Musial in 1958.

RECORD-BREAKING MOMENT OF THE WEEK

Cano hit his eighth career grand slam against the Royals on Sunday afternoon. With that blast, he passed Hall-of-Famer Tony Lazzeri for the most grand slams by a Yankee as a second baseman. Lazzeri actually hit eight career four-baggers, but one was in 1932 as a third baseman.

RIDICULOUS YANKEEMETRIC OF THE WEEK

According to the Elias Sports Bureau, Wednesday's 4-1 loss to the Rays was the first time the Yankees lost a game when leading 1-0 in the ninth inning since August 3, 2003 at Oakland, and the first time it happened at home since June 12, 2001 in a 2-1, 12-inning loss to the Expos.

However, to find the last time the Yankees lost a game when leading 1-0 in the ninth inning at home and the game didn’t go into extra innings, you have to go back to the Nixon administration.

On July 4, 1973 the Yankees lost 2-1 in the first game of a doubleheader against the Red Sox when Sparky Lyle blew the save in the ninth inning after Mel Stottlemyre had blanked Boston through eight innings.