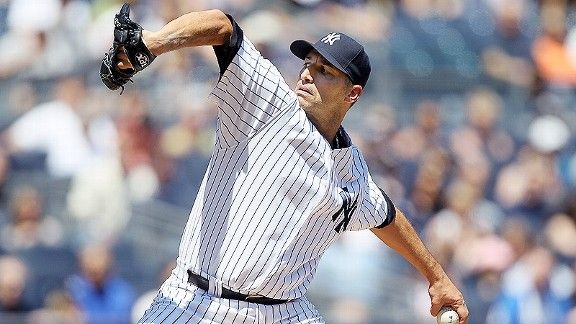 Andy Pettitte pitches in the first inning on May 13 in his return to the Yankees.STAT OF THE WEEK

The Yankees finished the week with a 4-1 loss to the Blue Jays as they failed to hit a homer for the ninth time this season. With the loss, the Yankees fell to 0-9 when not hitting a home run.

That is the longest such losing streak to start a season in franchise history, according to the Elias Sports Bureau.

WELCOME BACK MOMENT OF THE WEEK

In perhaps the most anticipated comeback by a Yankees pitcher since Roger "Goodness Gracious" Clemens returned to the Bronx in 2007, Andy Pettitte allowed four runs in 6⅓ innings on Mother's Day as the Yankees lost 6-2 to the Mariners.

He started strong, not allowing a hit until two outs in the fourth inning, which was the longest hitless bid of the season for any Yankees pitcher. But it didn’t end well, as Pettitte took the loss and fell to 11-12 in his career versus Seattle. The Mariners are the only AL team he has a losing record against.

Pettitte had trouble with his command, walking three batters and throwing a wild pitch.

His fastball averaged 2.1 inches from the edge of the strike zone, his second-worst "paint" rate since 2009. And he threw 22 pitches that were classified as "non-competitive" by Inside Edge video review, more than he had in any start in 2010.

His signature cutter also was not sharp, allowing two hits -- including a home run -- in six at-bats ending in the cutter. Only twice in 21 starts in 2010 did he give up multiple hits on his cutter, and only once did he allow a home run with that pitch.

Pettitte did have success getting ground balls and keeping the ball down. Thirteen of 21 (62 percent) balls hit into play were grounders, his third-highest ground ball rate since 2009; he got 10 ground ball outs, a mark he reach just three times in 2009 and 2010 combined. Only 18 percent of his pitches were in the upper third of the zone or above, his second-lowest rate since 2009.

Although the Yankees failed to complete the sweep of the Mariners on Sunday, they did win the first two games of the series in convincing fashion.

In the first game, the Yankees overcame a home run by Jesus Montero to win 6-2.

According to the Elias Sports Bureau, this marked the third straight season that a former player had homered in his first game against the Yankees after leaving the team, following Johnny Damon in 2010 and Melky Cabrera in 2011.

In the second game, Raul Ibanez hit his seventh homer of the season as the Yankees won 6-2 again. Ibanez, who turns 40 on June 2, now has the most home runs by a Yankee in his age 40 or older season (age as of June 15).

TEX MESSAGE OF THE WEEK

The comeback kids struck again on Monday night as the Yankees rallied to beat the Orioles 8-5. Mark Teixeira broke a 5-5 tie in the seventh inning with a two-run homer to give the Yankees their AL-leading 12th comeback win of the season.

BRONX BUMMER OF THE WEEK

Ivan Nova really struggled in this game, allowing five runs in 5⅓ innings before exiting with an ankle injury. The Orioles hammered his fastball, going 5-for-11 in at-bats ending in a heater, including two doubles and a triple.

Hiroki Kuroda's struggles away from Yankee Stadium continued, this time allowing seven runs and three home runs in the Yankees' 8-1 loss to Toronto on Wednesday.

Kuroda has now lost each of his first four road starts, posting a 6.23 ERA over 21⅓ innings. His four-start road losing streak is tied with Steve Trout (1987) for the third-longest such streak to start a career as Yankee in the Live Ball Era.

The only Yankees pitchers with longer streaks to begin their pinstripe careers are Monk Dubiel (1944) and Steve Barber (1967), who lost their first five road starts as Yankees.

Phil Hughes' struggles with the longball continued on Thursday night in Toronto, as he failed to get out of the sixth inning after allowing two runs -- both of which came on a home run by Jose Bautista.

Hughes has now given up a home run in each of his first eight starts of the season. That is the longest such streak to start a season in franchise history, surpassing a seven-start streak by Tim Leary in 1990.

The Yankees were held to one run or fewer for the ninth time in 38 games this season. The last time they had that many such games this early into the season was 1984. It was also their third straight game scoring one run or fewer against the Blue Jays dating to last season, which is the longest such streak in team history.

RIDICULOUS YANKEEMETRIC OF THE WEEK

In the last 20 seasons, the only other sons of former Yankees to allow one run or fewer and pitch at least seven innings in a win versus the Yankees were Todd Stottlemyre (1993) and Darren Oliver (2001), according to Elias.