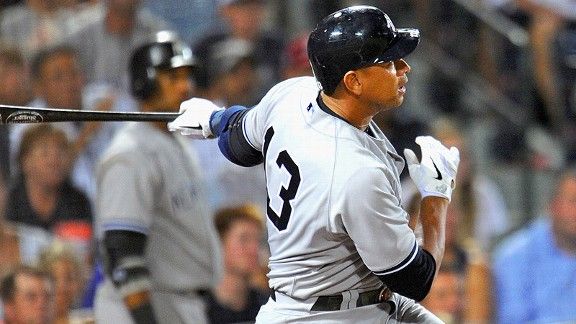 Alex Rodriguez hit his 23rd career grand slam on Tuesday, tying Lou Gehrig for the most all-time.MILESTONE YANKEEMETRIC OF THE SERIES

On Tuesday night Alex Rodriguez helped the Yankees rally late and beat the Braves 6-4, belting a grand slam in the eighth inning to tie the game, which was eventually won on Nick Swisher's two-run shot a few batters later.

The grand slam was the 23rd of his career, tying Lou Gehrig for the most in major-league history.

It was also the third game-tying grand slam in the eighth inning or later by a Yankee in the last 65 years. The others were off the bats of Darryl Strawberry in 1998 at Oakland and Bernie Williams in 1999 at Toronto.

The historic long ball came on a 93 mph sinker from Jonny Venters. Rodriguez's only other home run on sinker since 2009 also came versus the Braves, when he took Derek Lowe deep on June 25, 2009.

Here's some more "by the numbers" on A-Rod's record-tying slam:

• Fifth grand slam that came in the eighth inning, his most of any inning

• 11th different ballpark he has hit a grand slam in

• 23rd different pitcher he has hit a grand slam off

The Yankees started their road trip with a win on Monday night, as Ivan Nova threw seven scoreless innings in the Yankees' 3-0 win over the Braves. Nova is now 3-0 with a 0.90 ERA in road interleague games in his career, and hasn't allowed more than one run in any start.

He is the first Yankee to not allow more than one run in three straight interleague starts on the road.

Nova struggled with his command, however, throwing a season-worst 57 percent of pitches for strikes, and averaged a season-high 4.3 pitches per batter.

But he battled back, netting a career-best eight outs in at-bats ending in a hitters' count, and allowed just two batters to reach base in those counts.

He gave up just one hit in nine at-bats with runners in scoring position against Atlanta; opponents are now 3-for-27 (.111) over his last five starts when a runner reaches second base.

RIDICULOUS YANKEEMETRIC OF THE SERIES

On Monday, the Yankees scored one run in each of the first three innings and that was all the scoring in their 3-0 victory over the Braves. According to the Elias Sports Bureau, it was only the second win in franchise history with that linescore. The other game was a 3-0 victory against the Angels in 1977.