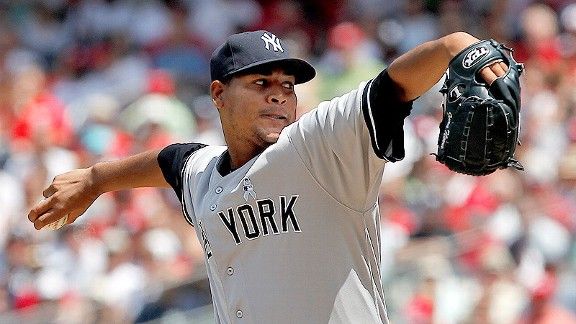 It's probably not as inflammatory as Frank Francisco and Chickengate, but Ivan Nova has no love for the Mets or their ballpark.

Nothing personal, you understand, but the Mets and CitiField conjure up bad memories for Nova, who beat the Mets here last July 1 -- and two days later found himself out of the major leagues and pitching for AAA Scranton.

Even though Nova got caught in a numbers game -- the Yankees needed to demote someone to make room for Phil Hughes, who was coming off the DL, and they weren't about to send A.J. Burnett down --it was a tough pill to swallow for a kid whose record at the time was 8-4 at the time.

"I didn’t cry in front of everybody because I’m a man and I don’t have to do that. (But) sure I did when I got back home,” Nova said. “I just said, ‘Okay. I’ll go down there and work.’ I didn’t show anything, because whatever I do,I was still going to Triple-A.”

The way Nova handled his demotion, without outward complaint, was a big reason why the Yankees brought him back less than a month later, and when he went 8-0 the rest of the way -- a winning streak that carried over through his first three starts of 2012 -- it convinced the Yankees that the 25-year-old righty had what it took to succeed in the big leagues.

"He didn't like it but I think he used it as, 'I'm going to go down and get better,''' Joe Girardi said. "That's the attitude players need to take.''

Now, Nova can become the first Yankee starter to 10 wins, when he faces Chris Young tonight in the middle game of the three-game Subway Series II. Nova's last outing was a gem -- 7-2/3 innings of one-run ball against the Nationals -- but his entire month of June has been ridiculous: 3-0, 22-2/3 IP, just two earned runs allowed for a minuscule 0.79 ERA. Along with CC Sabathia, Nova should get serious consideration for the 2012 AL All-Star team.

“I’m not really thinking too much about that,'' Nova said. "I just want to pitch my game every time. It’s good to have that many wins early in the season, but I’m focused on winning. Hopefully I can win tomorrow and keep winning every time I go out there, see where we are at the end of the year.”

In spite of the bad memories he associates with CitiField, Nova said he is in no danger of suffering flashbacks on the mound tonight. "At least I don’t have anybody in the minor leagues rehabbing or working their way back,'' Nova said. "I’m a little more relaxed now.''

The Question of the Day: Do you believe Nova has turned the corner after his rocky start (5.69 ERA after his first 8 outings this year)? Or you will continue to worry every time he takes the ball?

Up now: The incomparable Ian O'Connor's column on Frank Francisco's Chicken Fry. I've got the Rapid Reaction from last night's 6-4 Mets win and a bunch of blog items from the Yankees post-game clubhouse. Andrew Marchand has the Flushing-eye view of the Rapid Reax over on the Mets blog.

On deck: Clubhouse opens at 3:45 for tonight's 7:15 p.m. start. The Mighty Marchand will be there when the doors open so be prepared for plenty of blog items shortly thereafter. Check in often, and as always, thanks for reading.

Question No. 2: Roger Clemens watched a ballgame from the Monster seats in Fenway Park Friday night. What would you say to Clemens if he showed up among the Bleacher Creatures at Yankee Stadium this week? Let us know below, and please, keep it clean.