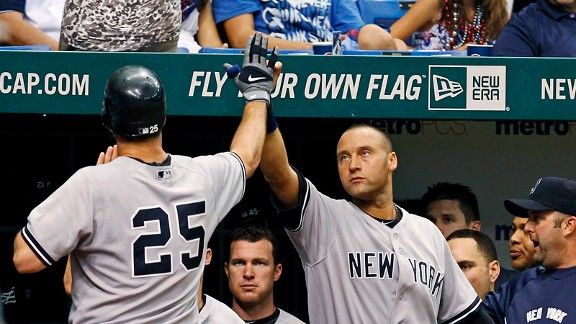 All bad things must come to an end. The Yankees snapped their nine-game losing streak at Tropicana Field with a 4-3 win on July 4. It was the longest road losing streak for the Yankees versus any team since they lost 15 in a row at the Rangers from 1989-91.

Robinson Cano had the game-winning hit, a two-run single in the eighth inning that extended his RBI streak to eight games.

That matches the longest such streak by a second baseman in Yankees history. Tony Lazzeri (1935), Joe Gordon (1940) and Luis Sojo (2000) also had eight-game RBI streaks.

This was the Yankees' fourth game this season with 15 or more strikeouts by their pitchers. The only other Yankees season in the Live Ball Era with four 15-strikeout games was 1997.

David Phelps (4⅓ IP, 8 K, 1 R) on Wednesday became the second major-league starter in the last 90 seasons to get 13 outs or fewer with at least eight strikeouts and no more than one run allowed. The other was Josh Beckett in 2004.

NIGHTMARE BY THE BAY

The Yankees opened the series on Monday with a 4-3 loss to the Rays, their eighth loss in a row at Tropicana Field.

Most Total Chances Without Error
As First Baseman Entering Monday

On a positive note, Freddy Garcia (5⅓ IP, 2 R) was impressive in his first start since April, a month during which he posted a 12.51 ERA.

That was the worst April ERA for any Yankees pitcher in the last 90 seasons (minimum four starts).

Garcia had his best slider of the season, getting 10 outs with the pitch (second-most since 2009) with just two hits allowed.

More than half of his 31 sliders were in the lower third of the zone or below; the Rays were hitless in six at-bats ending with a slider to that location.

NIGHTMARE BY THE BAY II

The Yankees' losing streak in Tampa Bay reached nine games on Tuesday night with a 7-4 loss. Ivan Nova, who was 12-0 in his previous 16 starts away from home, lost his first road start since last June.

His 12-decision road win streak was tied for the fourth-longest in Yankees history, and his 16-start road undefeated streak was the third-longest by a Yankee in the last 90 seasons.

According to the Elias Sports Bureau, he is the third player in the last 80 years to record 100 hits before July 4 when he was age 38 or older on Independence Day of that year. The others were Pete Rose for the 1979 Phillies and Paul Molitor for the 1996 Twins.

Up now: Wallace Matthews' column on the importance of yesterday's win for the Yankees as they head into Boston for the weekend.

Question of the day: Which of the these AL East teams do you think the Yankees will be battling for the division title two months from now -- the Rays, the Red Sox or the Orioles? Let us know below, and as always, thanks for reading.