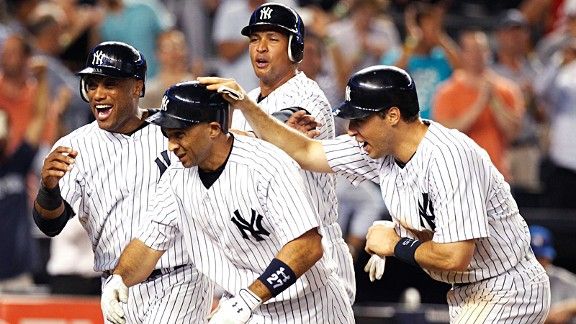 The Yankees celebrate after Raul Ibanez's tie-breaking grand slam on Monday.STAT OF SERIES

The Yankees extended their historic streak of scoring at least three runs to 42 games. Only one team in the Live Ball Era has had a longer streak in a single season: the 1994 Cleveland Indians (48).

The Yankees finished off a sweep of the Blue Jays with a 6-0 rain-shortened, seven-inning win Wednesday. This was their eighth straight win in the Bronx over Toronto, one game shy of the longest home win streak against the franchise (1979-80).

Robinson Cano extended his hit streak to 21 games, the second-longest in a single season by a regular Yankee second baseman. Only Joe Gordon, who had a 29-gamer in 1942, has a longer one.

Hiroki Kuroda went the distance, tossing his third career shutout. It was the second straight season a Yankee pitcher has thrown a shutout of less than nine innings. Phil Hughes had a six-inning shutout last year in Chicago.

ALL CC DOES IS WIN

CC Sabathia tossed six scoreless innings in his first start back from the DL on Tuesday, helping the Yankees to a 6-1 win over the Blue Jays. He has now reached 10 wins in each of his 12 major-league seasons.

He joins Tom Seaver, Don Sutton, Carl Hubbell and Eddie Plank as the only pitchers since 1900 to start their career with 10-win seasons in each of first 12 MLB seasons.

Sabathia threw his curveball a season-high 16 percent of the time (14 of 87 pitches) and the Blue Jays were hitless in five at-bats ending in his hook. All five of the outs with his curve came on pitches in the lower third of the zone or below.

CC also got the Toronto hitters to swing at a season-best 48 percent of his pitches out of the strike zone. All six of his strikeouts came on pitches out of the zone, as the Blue Jays went 1-for-12 in at-bats ending in a pitch to that location.

Yankees pulled out a 6-3 win against the Blue Jays in the series opener on Monday thanks to a tie-breaking grand slam by Raul Ibanez in the eighth inning. With that blast, Ibanez became the second Yankee aged 40 or older to hit a grand slam. Jose Cruz also went deep with the bases full at age 40 in 1988.

2-Out Tie-Breaking Grand Slam
8th Inning or Later, Yankees Since 1950

Ibanez also became the third Yankee left fielder since 1950 with a go-ahead grand slam in the eighth inning or later, joining Tom Tresh against the Tigers in 1964 and Shane Spencer against the Diamondbacks in 2002.

Hughes had another effective outing (7 IP, 2 ER) by battling back after consistently falling behind in the count.

The Blue Jays were 1-for-9 in at-bats that started with a 1-0 count. Since the start of June, opponents are hitting .162 in those situations; before that, they hit .274.