It never fails, does it?

The Yankees just get done winning eight out of 10, move a season-high 23 games over .500 and look as if they're preparing to tie up the division by Aug. 1.

And then they go to Oakland and lose four straight one-run games.

What's going on here? Is this just a bump in the road for a team that just days ago looked destined to play deep into October? Or the beginning of the end? 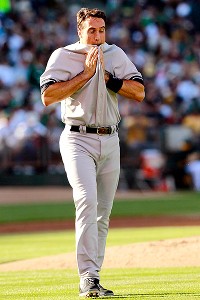 The Yankees were looking like a well-oiled machine, then they got swept in Oakland. Well, it's important to remember that all baseball success is cyclical, whether it's by an individual or a team. Players and entire lineups go through hot streaks and slumps. The best players, and teams, minimize the slumps and maximize the hot streaks. But every player, and team, no matter how good, is going to go bad for some point in every season. The Yankees haven't had a truly bad spell since mid-May, when they dropped 7 of 8 to drop to 21-21 and 5-1/2 games out of first place.

So this recent run of poor baseball needn't mean they are headed for disaster, because as we know, the Yankees followed that spell by going 36-23 before running into their latest cold spell.

Right now, they're not hitting very much, but the pitching has remained fairly solid. And as we've seen in the past, sooner or later, this team does begin to hit as a unit, even if certain individuals remain cold.

The Yankees begin a three-game series with the Mariners in Seattle tonight, and if they sweep it, what happened in Oakland over the weekend will seem a lot less catastrophic.

And quite frankly, I don't know what the lost weekend in the Bay Area really means at this point.

So I put it to you in the Question of the Day: In your opinion, is the four-game sweep by the Athletics a portent of bad things to come for this team? Or just one of those things that happens over the course of 162 games, ominous now but destined to be forgotten in a week or two? Let us know in the comments section below.

Up now: Jeff Fletcher's got the Rapid Reaction from yesterday's 5-4, 12-inning loss, as well as a variety of postgame blog items, including Rafael Soriano's reaction to what has been a rarity for him, a blown save.