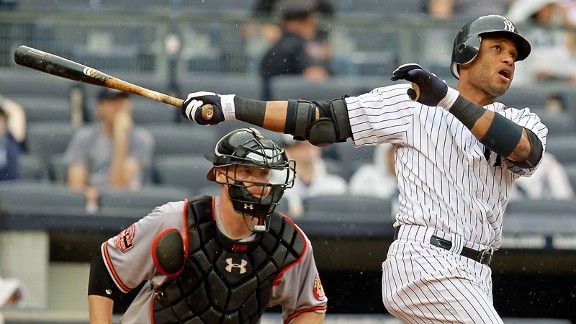 Robinson Cano hits his ninth career grand slam on Wednesday against the Orioles.

Stat of the Series

With their loss Tuesday, the Yankees finished July at 13-13, snapping their streak of 19 straight seasons with a winning record in July. That was the longest streak of winning “Julys” in major-league history, according to Elias Sports Bureau.

Curtis Granderson's first-inning homer extended the Yankees' streak of consecutive home games with at least one home run to 20, tied for the second-longest in franchise history. The longest such streak is 23 games, in 1963.

In a nice twist of fate, the Orioles went 0-for-15 with runners in scoring position.

Five is Not Enough

For the first time since the All-Star break, a Yankees loss was decided by more than two runs, as they were routed 11-5 on Tuesday. The Yankees jumped out to a 5-0 lead in the first inning, but then the Orioles answered back with seven runs in the top of the second.

According to the Elias Sports Bureau, it was the first time in franchise history the Yankees led by at least five runs at the end of the first inning and then trailed in the second inning.

Ivan Nova (9 ER, 10 H, 5 IP) had the worst start of his career. He joined Bob Turley in 1962 as the only Yankees to allow at least nine earned runs and 10 hits against the Orioles in the Live Ball Era.

Nova allowed a career-high five hits in 11 at-bats with runners in scoring position. Entering the game, he had held hitters to a .194 batting average with RISP, the fifth-lowest among AL starters.

Close But No Cigar

The Yankees' 3-2 loss on Monday dropped them to 6-11 against rookie starting pitchers this season. According to Elias, that is the worst record among AL teams.

Most HR At Age 40 or Older
Yankees All-Time

Ichiro Suzuki provided one of the highlights, hitting his first homer with the Yankees, and the 100th of his career. No surprise that it was a 363-foot shot to right field; since 2009, all 27 of his homers have been to right field.