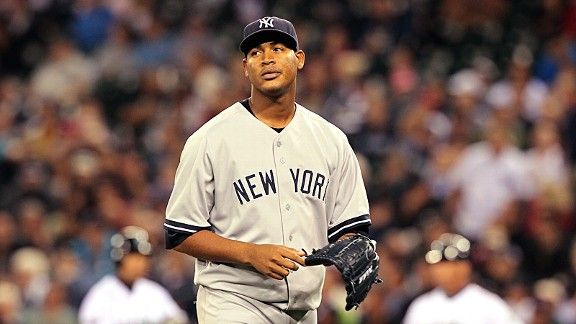 Which Ivan Nova will the Yankees see today in Toronto?... And so, presumably, do the Yankees in regards to which is the real Ivan Nova --the one who reeled off 15 straight wins between June 10 of last season and April 20 of this season? Or the one who has won just once since June 17 and has gotten bombed for 16 runs in his past two outings?

Joe Girardi says Nova is in no danger of losing his rotation spot -- "He's still going to go back out there in five days,'' Girardi said, regardless of how he pitches today against the Toronto Blue Jays -- but still, the Yankees are beginning to wonder which Nova they will see out there from start to start, which is the same way they used to feel about Nova's friend and mentor, A.J. Burnett.

"He’s not the only starter who goes through rough patches,'' Girardi said. "But it’s very important that we get him sorted out. He’s a big part of it.''

Nova says his recent problems all stem from his slider, or lack thereof. The slider is Nova's swing-and-miss pitch, but lately not many are missing it, and Nova said he studied tape of himself all week trying to figure out why.

“It was doing nothing. Nothing. Nothing,'' he said. "I saw a couple I threw that looked like a changeup. Instead of breaking to the corner, it stayed right in the middle, to the right-handers, especially.”

Nova said he worked on improving the slider in bullpen sessions this week with pitching coach Larry Rothschild, but admitted that so far, he hasn't been able to pinpoint exactly what he's doing wrong.

“I was watching my video and I don’t think it’s mechanical,'' he said. "We’ve been working on changing grips on the slider; I threw a lot of good ones in the bullpen. But my mechanics are good.''

So if it's not mechanical, is it mental?

Which is probably why Nova is remaining optimistic, that somehow, things will change today. "Let’s see how it goes,'' he said. "I feel positive I think I can do the job.”

Which brings us to the Question of the Day: Do you believe in Nova as much as Nova believes in Nova? If the playoff rotation had to be set today, and you had to choose between Nova, Phil Hughes, or Freddy Garcia, which would it be? Let us know in the comments section.

Coming soon: It's a day game today, Nova (10-6, 4.81) vs. LHP Aaron Laffey (3-2, 4.39), so the quick turnaround means the clubhouse opens early and the lineups should be posted by 10:30 or so, followed by Girardi's pregame media session and first pitch at 1:07 p.m. Check in often for blog updates and as always, thanks for reading.

Question No. 2: Do you think Ichiro Suzuki will play an important role for the Yankees in the playoffs this year? If so, how?