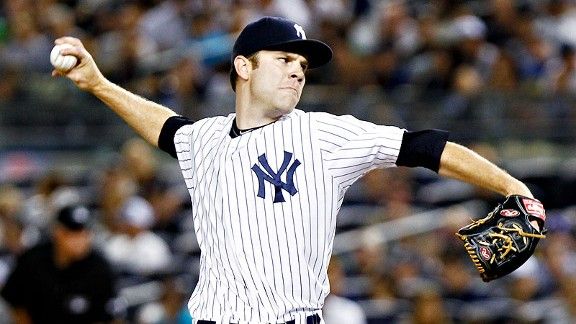 Phelps picked up his first career win as a starter last week, pitching five innings of two-run ball against the Rangers. He went to his off-speed stuff often, throwing just 47 percent fastballs to neutralize the high-scoring Texas lineup.

The 41 curves, sliders and changeups got him nine outs with three runners allowed. However, his off-speed stuff was hittable, as the Rangers missed on only four of 19 swings. They got good wood on those pitches, too -- seven of the nine put in play became either fly balls or line drives.

This will be Phelps’ first career start against the Red Sox, though he has pitched six solid innings in relief against them (3 ER, 5 K, 1 BB).

His fastball was effective in those two outings; the Red Sox were 1-for-13 with four strikeouts in at-bats ending in Phelps’ heater. His fastball location was excellent, with nearly half of the fastballs taken by the Red Sox netting called strikes (15 of 34, 44 percent).

Lester is suffering through arguably his worst season, having already reached a career-high 10 losses and pitching to an ERA above 5.00 for the first time.

He did throw one of his best games of the season last Sunday, striking out 12 batters over six innings while allowing just three hits and one run against the Indians.

His cutter was nasty in that start, with seven of the 12 strikeouts coming on the pitch, his most in any outing over the past four seasons.

The Indians also missed on eight of their 19 swings (42 percent) against the cutter and chased more than half of the 26 cutters Lester threw out of the strike zone.

Lester is relying on his cutter a lot more recently, throwing it nearly one-third of the time in his three August starts, compared to just 18 percent of the time from April through July.

This new cutter-heavy strategy seems to be working. Opponents are hitting just .097 (3-for-34) in at-bats ending in the pitch in August, compared to a .289 average in the first four months. He’s also getting more whiffs, out-of-zone swings and strikeouts with the pitch this month than ever before.

Curtis Granderson is 6-for-26 against Lester, and that .231 batting average is actually the good news. Granderson has struck out in nearly half of his plate appearances vs. Lester (13 of 28). In fact, six of the past seven outs he has made against Lester have been strikeouts.

Could Jayson Nix get another start this afternoon? Nix is 6-for-16 (.375) in his career versus Lester, and four of those six hits have been for extra bases, including three home runs. Only two major-league players have more home runs against Lester: Carlos Pena (6) and Jose Bautista (4).