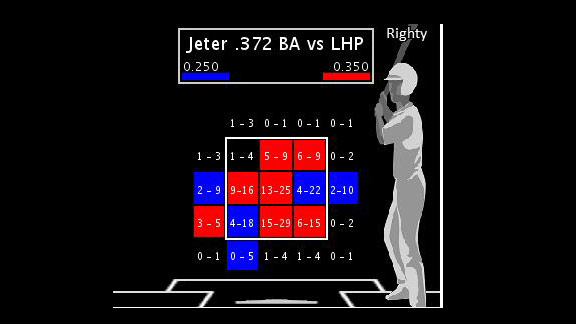 Derek Jeter has owned left-handed pitching throughout 2012.Yankees captain Derek Jeter will try to reach another milestone on Wednesday against the Blue Jays.

He enters the first game of the doubleheader with 199 hits, one shy of a number deemed significant in baseball annals. Here’s a closer look at Jeter’s approach:

This would be Jeter’s eighth season with at least 200 hits, matching the Yankees mark held by Lou Gehrig, who had eight in a run spanning from 1927 to 1937.

Jeter will be the seventh player to post eight seasons of at least 200 hits. His teammate, Ichiro Suzuki is tied with Pete Rose for the most in major-league history, with 10.

Jeter’s .323 batting average is one point shy of being the best by a player whose primary position was shortstop in his age 38 season or older (Baseball-Reference.com defines seasonal age as the age on June 30 of that season).

Fun fact: If you include the postseason, Jeter has 3,478 hits. He has the sixth-most hits all time when you include regular and postseason numbers.

In the first game of the doubleheader, Jeter will face Henderson Alvarez. He's 0-for-8 in his career against Alvarez, tied for his worst 0-for against any active pitcher. He's also 0-for-8 against Jake Peavy and Randy Wolf.

In the second game, Jeter is facing Blue Jays starter Ricky Romero, who enters having lost a franchise-record-tying 13 straight decisions.

How is Jeter getting his hits?

Jeter enters Game 1 on a 12-game hitting streak, with 22 hits in 55 at-bats. His 28 percent line-drive rate over this span has been a key to this spurt.

This is one of those runs where it seems like Jeter can do no wrong. Consider these two stats, which go hand-in-hand:

1- On at-bats that end with a pitch out of the strike zone during this hitting streak, Jeter has as many hits (six) as he does outs.

That's not typical for Jeter. Prior to the streak, he was hitting .179 against out-of-zone pitches.

2- Jeter is 15-for-28 (.536) during this hitting streak in two-strike counts (remember that the average major league hitter is a sub-.200 hitter with two strikes).

there's a good chance Jeter's 200th hit could come in the first frame. He is hitting .382 leading off the first inning of games, the highest batting average in such situations in the majors (min. 25 plate appearances).

Research by Mark Simon, Katie Sharp, Will Cohen, and Jeremy Lundblad was used in this article