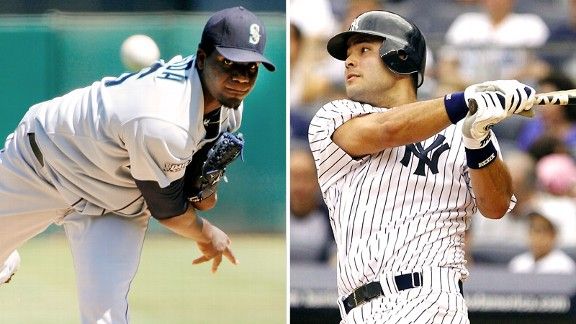 In January 2012, the Yankees sent catcher Jesus Montero to the Mariners for starting pitcher Michael Pineda in an ill-fated trade.On Sunday, it will be the one-year anniversary of the Michael Pineda-Jesus Montero trade. The deal, which also saw prospect Jose Campos come east and Hector Noesi go west, has been pretty unsatisfying for both teams.

Let's take a look back at what was said and what has transpired over the last 12 months.

1. THE TRADE: On Jan. 13, a Friday, Brian Cashman dealt Montero for Pineda. Cashman sent a verbal bouquet along with Montero to Seattle.

"He may very well be the best player I've traded," Cashman said of Montero, whose bat excited Yankees fans in September, 2011.

Still, Montero was never going to be the defense-first catcher that Joe Girardi favors, so Montero was likely a no-go to ever be behind the plate full-time in the Bronx.

Meanwhile, Pineda, an All-Star as a rookie with the Mariners, was very excited about the deal.

"I never thought I would become a New York Yankee so early into my career," Pineda said. "This is the best thing in the world. Pitching alongside CC Sabathia, I'm speechless. And playing alongside players such as Alex Rodriguez and Derek Jeter is unbelievable."

2. THE MEDIA: Pineda, who was just 23, arrived in camp and seemed to be overwhelmed by the attention over every move he made. The media respected the fact that his first language was not English, but he was still very uneasy in the clubhouse.

"Sometimes I'm a little scared because I don't want to make a mistake," said Pineda, who grew up in the Dominican Republic. "I try to speak English, but my English is not very good."

3. THE WEIGHT: What hurt Pineda early was that he was overweight and could never find his fastball. A heater that was supposed to be 98 had trouble being consistently in the low 90s. By the end of camp, the Yankees decided not to take the struggling Pineda north. He was put on the DL with shoulder tendinitis.

4. THE SURGERY: Then things got worse. Pineda tried to rehab and felt pain in his shoulder. Pineda eventually needed surgery, prompting even Cashman to question the deal.

"This is a massive decision gone wrong, right now," Cashman told Wallace Matthews in late April. "So all scrutiny is fair. ... Right now, our hopes and dreams for this player are in jeopardy. Hopefully, someday, our fans will get to see what we expected to see from him for many years to come."

5. THE ARREST: Pineda made more bad news in August after being arrested for DUI in Tampa at 2:35 a.m. during his shoulder rehab.

The police report said Pineda "had a fixed gaze and his eyes were bloodshot, watery and glassy." It added, “No headlights were illuminated at night.” The officer could smell “a distinct odor of an alcoholic beverage coming from his breath and his speech was slurred.”

6. THE FUTURE: Since then, the Yankees have tamped down expectations for Pineda. He is long-tossing at the moment and the hope is he could come back by June of 2013 to throw his first major league pitch as a Yankee. Meanwhile, Montero did not overwhelm in Seattle.

While still not proving he can catch regularly in the bigs, Montero hit .260 with 15 homers and 62 RBIs. His .OPS was .685. The Mariners have moved in the fences this season so his numbers should rise.

As Pineda attempts to come back, he will try to return from an injury that takes supreme dedication. A year ago, the talk was that Pineda could ride shotgun with Sabathia to lead the Yanks' staff. Now, it is a question of whether he ever will be in the rotation.

QUESTION: Obviously, the trade has not worked out so far, but do you still believe Pineda can be a top-of-the-line starter?