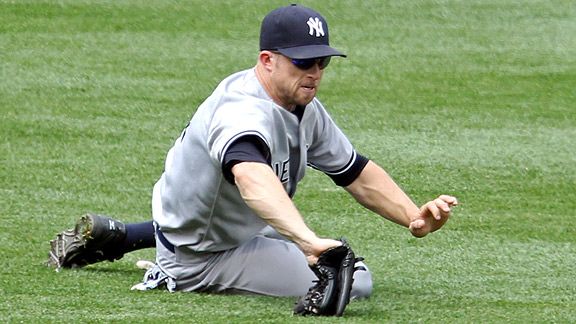 These are the types of plays Brett Gardner would make regularly in center field, too.There are three days left until spring training and three more topics for Wally Matthews, Andrew Marchand and me to discuss as pitchers and catchers file into Tampa. Next up: A look at a way in which the Yankees may want to tweak their outfield.

Earlier in the week, Brian Cashman and Joe Girardi were asked about moving Brett Gardner to center field and Curtis Granderson to left field for the 2013 season. They described it as something that they would talk about and consider. They certainly didn't rule it out.

Memo to Cash and Joe: The time has come to make the move.

1. GARDNER CAN HANDLE IT, NO PROBLEM

Gardner is nearly three years younger and is faster than Granderson. Gardner has excelled in left field with Gold Glove-worthy numbers.

Most Defensive Runs Saved
LF since 2010

He’s a better fit for the position at this point.

The Yankees have seen enough of a sample from Gardner (nearly 1,200 innings' worth) in center field to know he can play the position and play it very well.

He has 28 Defensive Runs Saved in center in that sample’s worth of innings, a total that would have led all center fielders last season.

Both of the advanced defensive metrics (Defensive Runs Saved and Ultimate Zone Rating) agree that Granderson has had issues playing center field the last two seasons.

You may not notice this, but that’s because even the worst center fielders can look pretty good at times. Put it this way: If someone was a bad defender, you wouldn’t put him in center field.

It just happens that Granderson is the worst of the good ones, rating above only Matt Kemp and Adam Jones in Defensive Runs Saved over the last two seasons.

Most notably, Granderson fares weakest in the range component of the advanced stats. He’s not catching balls that a lot of his peers are turning into outs.

Given that Granderson will turn 32 in March, it’s safe to say he’s not going to get any faster and his skills are nearing the diminish phase.

Two years ago, when I did a feature on speedy Angels center fielder Peter Bourjos, his teammates talked about the intimidation factor of playing someone like Bourjos (or Mike Trout) in center field. They recalled the look of frustration from the likes of Miguel Cabrera when Bourjos chased down one of his balls.

Granderson doesn’t scare anyone in center. But Gardner is capable of doing it.

He just needs to be given the chance.

Yankees fans: Is it time to move Gardner to center and Granderson to left? Let us know in the comments.