New York Yankees right fielder Aaron Judge is 6-foot-7, 282 pounds and possibly the most fascinating player in baseball. But if you don't watch him closely enough, there are things about the massive rookie you might miss.

It begins just moments before first pitch -- with a superstition. Judge pops two pieces of Dubble Bubble sugar-free bubblegum in his mouth. Until he makes an out, he'll continue to chew it. If he picks up a hit in his first at-bat, it stays in. Another hit, and he keeps chewing. Another ...

"Hopefully, by the end of the night, I have a nasty, old, unflavored piece of gum in my mouth," Judge says. 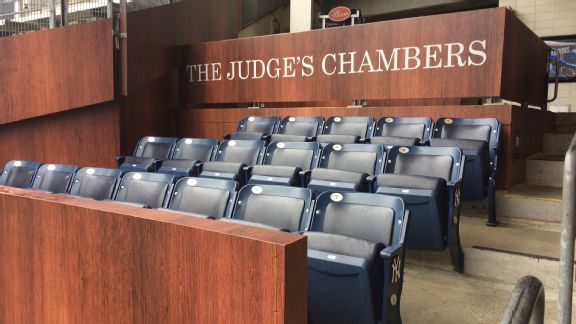 The new Judge's Chambers at Yankee Stadium accommodates 18 fans picked at random from other seats. The fans get to borrow a black judge's robe and keep a foam gavel that reads, "All rise!" Story »

Judge started the tasteless tradition in college and he doesn't plan on changing it. His outs do have a sweet ending, because if he makes one, he throws away the old gum and takes two fresh pieces.

If he goes 3-for-3 and the game has a four-hour pace, Judge will just keep gnawing on the old gum, with no thought of changing it out or adding a new piece.

Occasionally, Judge will switch it up if he's in a rut. He'll go with sunflower seeds, available next to the gum in the middle of the Bombers' dugout.

Judge, 25, already has been compared to Derek Jeter -- by of all people Yankees manager Joe Girardi, who is not exactly Don King when it comes to hype. Judge's tangible contributions -- his .315 average, his MLB-best 15 home runs and his 30 RBIs -- are out there for all to notice, but he has some intangibles that do not show up in any wins above replacement formulas.

Judge does something that is very Jeter-esque, too, though his teammates say they've ever seen anyone do it before.

After the final out of each inning, Judge runs in from right field and waits outside the dugout for his fellow outfielders. There, in an act of chivalry, he allows them to enter the dugout first, offering words of encouragement and often a high-five or pat on the back.

"I’ve always done it -- in the minor leagues, too," Judge says. "If someone makes a good play or someone does something on defense, I want to be there and say, 'Hey man, nice play' or 'Good job.' If there is miscommunication in the outfield, it gives me a chance to grab them real quick and say something."

Back in Jeter's day, when the Yankees scored or got a big hit, Jeter was always the first out of the dugout to congratulate his teammates. It was a trademark No. 2 move.

"That’s who he was," Girardi says. "Derek was all about winning. I feel the same about that kid. It is very genuine. He is all about the team. His encouragement of players, helping guys, being upbeat all the time -- it is really kind of cool to witness."

"Hopefully, by the end of the night, I have a nasty, old, unflavored piece of gum in my mouth."

Girardi thinks Judge is a leader in his own way despite being a rookie -- something that might irk veterans if Judge weren't so respectful and earnest. His teammates notice that Judge is not trying to stick out, but rather help out.

"He is a positive influence on his teammates," left fielder Brett Gardner says. "He always has a positive attitude. He says different things to you every time [when he waits to go into the dugout] and different things to each person, like, 'Let’s go get 'em.' 'Let’s go get some more runs.' 'Nice play.' Just little things during the course of the game. He is always on top of that."

There is an excitement for the game that can be lost all too quickly among major leaguers. At times, the repetitiveness of drills makes baseball a grind. Outfielder Aaron Hicks, who is hitting nearly as well as Judge this season, is fascinated by how Judge remains so enthusiastic.

Judge credits his parents, who adopted him as a baby, for giving him his first lessons on putting team above self. He says he's been blessed with coaches who have done the same. Judge is accommodating in talking to the media, but he almost blushes when speaking about himself. The top-step move could be seen as grandstanding, if Judge didn’t act the right way.

"It’s genuine," third baseman Chase Headley says. "He is not doing it to have somebody write about it or see it."

But once Little Leaguers see it, you can imagine some gum will be chewed -- for hours -- and kids will be waiting for others to enter the dugout first.

"I think he does things, like Derek did, when Derek was young, just by example," Girardi says. "People are going to say, 'That’s pretty neat, I’m going to do that.'"