What is it like to NOT put on the pinstripes? Not every Yankee is thrilled about it
4yAndrew Marchand
New Yankees Gallo, Rizzo excited for playoff push
5h
Rizzo homers in his debut as Yankees beat Marlins 3-1
17h
Yanks get Heaney from Angels for minor leaguers
1d
Winners, losers and in between: How all 30 teams fared as dust settles on thrilling MLB trade deadline
Boston Red Sox
23hBradford Doolittle
This is the wildest MLB trade deadline in years -- and it's not over yet. Where does it go from here?
2dDavid Schoenfield
Trade grades: Yankees continue deadline spree by acquiring Anthony Rizzo from Cubs
2dDavid Schoenfield
Yankees acquire All-Star slugger Rizzo from Cubs
2d
Patiño blanks Yanks as Rays pound Cole, bullpen in 14-0 rout
2d
Boone says Yankees 'a lot better' with Gallo
2d
Trade grades: Brewers solidify infield with Eduardo Escobar
3dBradford Doolittle
Judge hits tiebreaking single in 10th, Yankees beat Rays 3-1
3d
Aug 25, 2017

NEW YORK -- Of all the New York Yankees, left fielder Brett Gardner has been here the longest. He was drafted in the third round by the team in 2005 and made it to the majors fast enough to be part of the 2009 World Series championship team. Besides having the most tenure, he's a traditionalist.

With MLB Players Weekend upon us, the Yankees are bucking history by wearing names on the backs of their uniforms for the first time ever and will go without home pinstripes for the first time since 1914. Gardner is going along with the program -- but he doesn't necessarily like it.

"I’m more of an old-school guy, so I'm not a big fan of it," Gardner said. "It doesn't really matter what I think. I'll play and hopefully we'll win."

"I tried to go no name at all and keep it original. But they made me put something. I figured I never had my name on the back of my jersey before, so instead of putting a freakin' nickname, I put my name on there. That [having no name] apparently is not allowed."

Gardner actually had a unique idea for his uniform -- one that reflected his personality, which is the point of the whole endeavor -- but it was turned down. Gardner wanted to stick with Yankees tradition and have no name or nickname whatsoever on the back of his jersey.

"I tried to go no name at all and keep it original," Gardner said. "But they made me put something. I figured I never had my name on the back of my jersey before, so instead of putting a freakin' nickname, I put my name on there. That [having no name] apparently is not allowed."

Gardner's view differs from many of his teammates. Though they respect the tradition of the pinstripes, some Yankees were excited about doing something different for one weekend.

"It is going to be weird, obviously," said Dellin Betances, who grew up in the city as a Bleacher Creature, even attending David Wells' perfect game in 1998 as a fan. "We have only worn pinstripes and gray on the road. I think it will be cool."

Betances will wear "D. Dawg" on his back, because as a minor leaguer, some teammates -- including J.R. Murphy, Adam Warren and Shane Greene -- gave him the moniker. 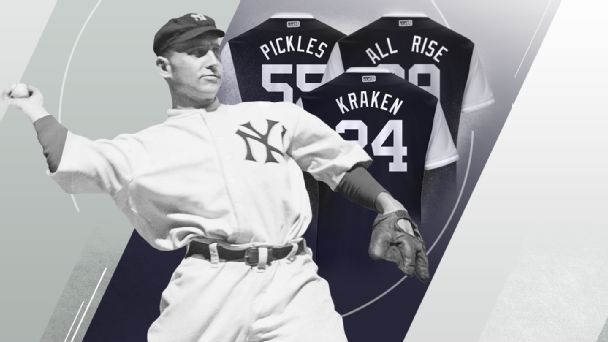 The Yankees haven't worn home jerseys without pinstripes in more than a century. As they prepare to take the field without them for MLB's Players Weekend, we picked 10 nicknames -- some from 1914 and some you'll see starting Friday. Which is which? Take the quiz! »

This weekend is intended to allow players to express themselves and better connect with fans. For 29 teams, it's no big deal, but in the Bronx, it's a historically significant break. Todd Frazier isn't getting too worked up about it.

"You guys are blowing this up too big," the third baseman said. "I think just for the three days, it is good for everybody in baseball. Then we can go back to the pinstripes. It is good."

Frazier and Betances mentioned the charitable aspect of the weekend, as players' jerseys will be auctioned off for good causes.

Frazier will be wearing "Toddfather" on the back of his uniform, a nickname he picked up in Cincinnati. He said it works with his New Jersey roots.

"That kind of pit boss sort of attitude," Frazier said. "I think that fits me pretty perfect."

Well, almost perfect. "I'm not in the mob," Frazier pointed out.

Players also will be allowed to wear any type of batting gloves and cleats they desire, and there will be a blank spot on the shoulder where they can fill in the name of someone who has been especially important to them.

"It is going to bring out the true self, like a normal person," Frazier said.

Commissioner Rob Manfred, who grew up a Yankees fan, played down the significance of the Bombers not wearing pinstripes at home.

It will, but surely there will be some naysayers in this social media age. Outfielder Aaron Hicks -- who will have "A-A Ron" on his back, a nod to a "Key and Peele" skit -- has mixed feelings.

"I'm kind of in between on it," said Hicks, who's in his second season as a Yankee after playing three years in Minnesota. "I've worn my name on the back of my jersey before, so I know what that feels like to kind of have a team that does it, then to come to a team that doesn't do it. I feel like if you came up with this organization, you wouldn't want to do it because it is a tradition, and it is kind of one of the things that makes this organization so amazing. To be the first team to sort of do, it is sort of crazy."

Warren, who started in the Yankees organization, returned this season after a brief stint with the Cubs. He will wear "Rocket" above his number, a nickname given to him by minor league teammates who compared him to Roger Clemens.

"It is a neat way for players to express themselves," Warren said. "It lets the fans in on who they are and where they are from. I think it will be neat to kind of see that. I think for the traditionalists out there, it is only three days. It will definitely be different to see the Yankees run out there in something other than the pinstripes. I think it will be neat for us and the fans to get to know a little more about us."