NEW YORK -- The alarm clocks Saturday morning should have played "Star Wars" music. As word trickled in that the New York Yankees were acquiring 28-year-old superstar Giancarlo Stanton from the Miami Marlins, you could almost hear the Darth Vader theme again. The easily likeable Baby Bombers of 2017 were all grown up.

The Evil Empire is officially back.

For Yankees fans, this Stanton heist will not be looked upon as anything sinister, just the evil genius of general manager Brian Cashman, who has been on a year-and-a-half-long winning streak. Cashman believes that when you have a chance to win, you press on the gas. 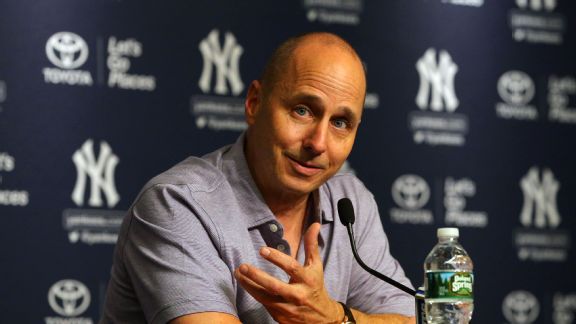 • Olney: Why the Stanton deal makes so much sense for the Yankees Insider »

Since July 2016, the Yankees have completely rebuilt and reloaded and, nearly a year to the day Cashman anointed the Boston Red Sox “the Golden State Warriors of baseball,” it is Cashman who has made a Kevin Durant-type move for a team one win away from the World Series last season.

To top it off, it's Derek Jeter, of all people, who offered the Yankees the National League's reigning Most Valuable Player. Jeter might be approaching Jeffrey Loria-like levels of unpopularity in South Beach, but he'll receive his usual warm reception during his rare appearances in the Bronx.

Once the deal is finalized, the Yankees will still be in position to fall under the luxury tax, as the Marlins are packaging $30 million to New York with Stanton, making Stanton’s contract $265 million for 10 years with an opt out after Year 4. The Yankees receive savings in unloading second baseman Starlin Castro while giving up second tier prospects, Jorge Guzman and Jose Devers.

The potential Yankees lineup for 2018, as it stands now:

In other words, the lineup would be insane. The 111 home runs hit by Judge and Stanton last year were only 17 fewer than the entire San Francisco Giants hit. The fine details still need to be worked out, but it's an enviable challenge for new manager Aaron Boone.

And it will likely get even better, as Gleyber Torres -- who will be back in the spring after Tommy John surgery on his non-throwing elbow this winter -- is considered one of the best prospects in baseball. Torres is about to turn 21 and could be the Yankees’ next second baseman or third baseman. Torres will be given a chance to win a job out of spring training. If not, he could be called upon soon after.

On top of all this, the Yankees have the best farm system in baseball, poised to make trades whenever Cashman so wishes for top pitching. With outfielders such as Clint Frazier and Estevan Florial in his system, Cashman can acquire the team’s greatest need -- more starting pitching. Though, with Luis Severino, Masahiro Tanaka, Sonny Gray, Jordan Montgomery and possibly the return of CC Sabathia, he has a very good foundation already.

It's not only the combination of Stanton, Judge and, don't forget, Sanchez, in one lineup, it's that with this deal, the Yankees’ first requirement was still resetting the luxury-tax number. The Yankees wanted to fall under it this winter, which is their No. 1 goal.

There was no way Hal Steinbrenner would agree to make this trade without being able to fall under the tax. This brings us to the ramifications for next winter when the epic free-agent class, led by Bryce Harper and Manny Machado, will be available.

The Yankees will be under the tax, which means if they give Machado a $300 million contract, it would not cost them $450 million. It would seem, at this point, with Judge and Stanton already in the outfield, the Yankees would be out of the Harper sweepstakes.

But who knows at this point? The Evil Empire is back. The Yankees’ lineup is absolutely absurd with Stanton and Judge. The Yankees are the undisputed center of the baseball universe once again.

They are the Golden State Warriors of baseball, just with more size.