'Here we go. Don't miss it!' Aaron Judge plans to 'hunt mistakes' -- and make pitchers pay
2yColey Harvey
The most hyped prospect ever for all 30 MLB teams
6hDavid Schoenfield
Yanks legend Gehrig's bat sells for $1 million
New York Yankees
1dTom VanHaaren
Sources: MLB, players eye May return in Arizona
3dJeff Passan
Second-Chance World Series Round 1: Our tourney of MLB's best non-champs begins
3dBradford Doolittle
We'll miss the London Series, which gave us the weirdest MLB game of 2019
5dSam Miller
Second-Chance World Series: The best from every MLB franchise not to win it all
6dBradford Doolittle
From Mays to Trout: What lost career time means for the legacies of MLB greats
8dBradford Doolittle
'We're going to learn from this': MLB managers on coping with the pandemic
10dMarly Rivera
The best behind-the-scenes MLB moments we ever saw
13dESPN.com
Mar 15, 2018

Mired in a post-All-Star Game slump many were quick to blame on his victorious appearance in the Home Run Derby, Aaron Judge searched for answers.

Was it his swing? Did his desire to showcase his power in the derby dramatically affect his launch angle in the games that followed? Was he trying to live up to his home run hitting hype from the season’s first half, and muscle out every pitch he saw?

As he reviewed the swings he had taken and the pitch counts he faced, the New York Yankees right fielder came to a simple conclusion: He was chasing far too many "good pitches" from opposing pitchers.

Instead, he needed to go after their mistakes. The revelation resulted in a September turnaround he’s hoping will continue this whole season.

Recently, he has replicated it well, smacking a trio of hard base hits in consecutive games this past weekend. If he keeps doing that, 2018 could be as good -- if not better -- for the reigning American League Rookie of the Year.

“That was the biggest thing, just hunting the mistakes,” Judge said. “Don’t try to go out there where the good pitch is. Try to hunt those mistakes that people leave out there -- because there’s a lot of mistakes over the middle.”

Of the 20 hits Judge amassed in those final 16 games of the regular season, 14 were off pitches located in the middle of the strike zone. Half of the hits in those locations were home runs.

To new Yankees manager Aaron Boone, Judge’s ability to hunt mistakes this season will be a matter of timing.

“When he’s on time, then he owns the strike zone. He controls the strike zone. And that’s when you’re not chasing pitches you shouldn’t,” Boone said. “For me, if he’s traveling on time, then he’s deadly. And that’s a challenge for all hitters -- to find that good timing. Once you have that, you’re able to hit mistake off-speed pitches. But more importantly, it’s easier to lay off pitches the pitcher wants you to chase.”

Can anyone fill Judge's shoes? 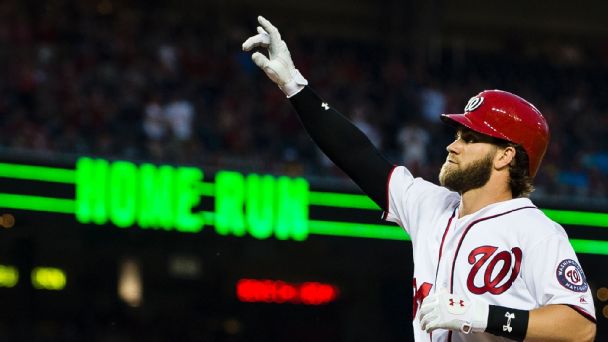 • Judge thinks he's 'one and done' with Home Run Derby

Despite finishing the regular season with an American League-leading 52 home runs, Judge wasn’t quite a deadly hitter last postseason. He was mostly held in check in October, hitting .188 (9-for-48) with four homers, 27 strikeouts and a tame .500 slugging percentage.

The playoffs notwithstanding, Judge rediscovered himself during the pennant chase because he wasn’t preoccupied with trying to crush sliders.

“You’re never going to hit a good slider,” Judge said. “So for me, it’s about just focusing on my strengths -- and the bad [pitches]. I’m a baseball player, I’m an athlete, you’re going to hit those anyway.

“So that’s kind of what I did the whole month of September. I just really focused back to my strengths and what I do well. That helped me excel. Because then I started to see a lot more mistakes because people started to be more careful, and that’s when I’ve got to capitalize.”

Opposing pitchers likely will be careful with him this season as Judge figures to bat second in a lineup that could include the speedy Brett Gardner ahead of him at leadoff, and then some combination of power hitters Greg Bird, Giancarlo Stanton and Gary Sanchez behind him.

With the threat of danger looming on deck and in the hole, pitchers can’t be too fine with Judge. Walk him, and a three-run homer with Gardner potentially also on base could be the result.

“They’ve got all these guys around me that you don’t want to see them come up to the plate with runners on base,” Judge said.

Look no further than Judge’s homer at Seattle last July 21 to see how successful he can be at “hunting” and hitting mistakes. The 437-foot shot nearly left Safeco Field, landing in a row of seats in the upper left-field bleachers. The blast -- with a 102.8 mph exit velocity -- had the Yankees’ Twitter account joking Judge “broke StatCast.”

The ball from Andrew Moore, a 77 mph breaking pitch, hung in the top of the strike zone -- a mistake location.

“The biggest thing for me with off-speed pitches like that is if you see it kind of pop up, that’s the one you want to kind of go for,” Judge said, snapping his fingers near his ear, mimicking the release of a curveball. “The ones you kind of see them come up, it’s ‘Here we go. Don’t miss it!’”

Lately this spring, Judge hasn’t been missing many baseballs. He had a pair of sharp base hits to the left side in Saturday’s game against the Mets. The next day, he hit his first homer of spring training. The liner to left came off a fastball in the middle of the zone, and landed on the balcony of an adjacent building.

It was one bold sign that as Judge continues rounding into form following offseason shoulder surgery, his mistake-hunting philosophy could be the key to making him an even more dangerous hitter this year.