The Evil Empire Strikes Back! Why the Yankees being good is great for baseball
5yDavid Schoenfield
Report: Royals, reliever Chapman agree to deal
8d
MLB Power Rankings: Who's No. 1 on our midwinter list?
8dESPN
Dodgers, Mets among 6 teams hit with luxury tax
9d
Passan: The eight things we learned from MLB's $3.8 billion offseason
9dJeff Passan
Who will get traded? Which team will make a big move? What to watch the rest of this MLB offseason
14dESPN
Way-way-too-early 2023 MLB All-Stars: Predicting full rosters for both the AL and NL
16dDavid Schoenfield
Pride, power ... and complaining about bad airplane food? Former Yankees captains on what awaits Aaron Judge
18dJoon Lee
The one position that most haunts all 30 MLB teams -- and if there is hope in 2023
21dBradford Doolittle
Yankees add Minaya as adviser in baseball ops
22dJoon Lee
One stat that will make -- or break -- 2023 for all 15 American League teams
23dDavid Schoenfield
Yanks bring back Sabean as adviser to Cashman
24dJoon Lee
Judge is AP's top male athlete after 62-HR year
28d
Can you buy a World Series? What Mets can learn from the biggest spenders in MLB history
29dDavid Schoenfield
Braves get LHP Luetge in trade with Yankees
29d
Mar 28, 2018

Two years ago, the New York Yankees got off to an 8-16 start and were never really a factor in the AL East race (they made a minor run in early September before finishing 84-78). With the team stumbling in midsummer, GM Brian Cashman traded Andrew Miller to the Indians and Aroldis Chapman to the Cubs, giving each of the eventual World Series participants a key bullpen component.

For the sport’s flagship franchise, it was the lowest point since the early 1990s. The team was irrelevant, lacked a star attraction (Brett Gardner led position players with just 3.4 WAR, the lowest team-leading figure since the 1981 strike season) and home attendance plummeted to its lowest figure in nearly two decades. 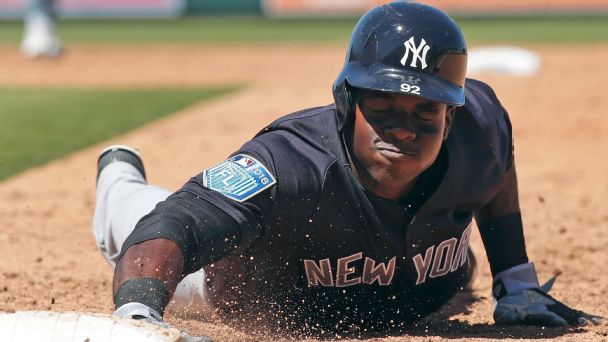 The Yankees are loaded -- and there's more talent on the way. Schoenfield »

It was a window for baseball fans across the country to rejoice in the Yankees’ apparent misery. It didn’t last long. Gary Sanchez started blasting home runs that August, Aaron Judge was called up and broke out in monstrous fashion in 2017, the team returned to the postseason and then acquired National League MVP Giancarlo Stanton this past offseason.

The Yankees are back to what they believe to be their historical birthright: at the axis of the baseball universe. Four-time All-Star reliever Dellin Betances put the hammer down on the first day of spring training, saying, “If we don’t win [the World Series], it won’t be a great year for us.”

Cashman echoed those thoughts back in February as well. “I need another ring,” he told reporters. “I’ve got rings, but there are other guys who don’t have rings. Some have rings somewhere else, but they want a Yankee ring. I think having a ring with a ‘NY’ on it means more than any of the other ones out there.”

Cashman didn’t predict or guarantee a World Series title, and after the Brandon Drury trade, he would signal respect toward the Red Sox by saying, “They are the defending American League East champs. We’re not. Until somebody takes that away from them, you have to pay that homage.”

Still, the bravado of his ring comment, that a Yankees ring is superior to one won in Houston or Chicago or Kansas City or somewhere else -- is exactly why the Yankees will always be baseball’s ultimate foil.

That’s good. Baseball is better and more interesting when the Yankees are one of the teams to beat. When the Yankees are in the postseason, more people pay attention. The numbers back that up. Game 7 of last year’s American League Championship Series between the Yankees and Astros was the highest-rated program in the four-year history of FS1. Even though sports ratings in general are declining, it was the most-watched LCS matchup since the 2010 NLCS, which appeared on Fox. When the Yankees were in the 2009 World Series, viewership increased 6.2 million per game from the year before. Without the Yankees in 2010, there were 5.1 million fewer viewers per game.

Sure, some of that is simply the result of the larger population in the New York metro area. But the Yankees bring in more casual fans across the country as well, on television and at the ballpark. It’s no coincidence the Yankees always draw well on the road.

With Judge and Stanton together in the lineup, that’s certainly going to be the case in 2018. The Stanton trade -- remember, he blocked deals to the Giants and Cardinals -- helped reaffirm the whole “Evil Empire” status of the Yankees. The Yankees are ready to embrace that role again. 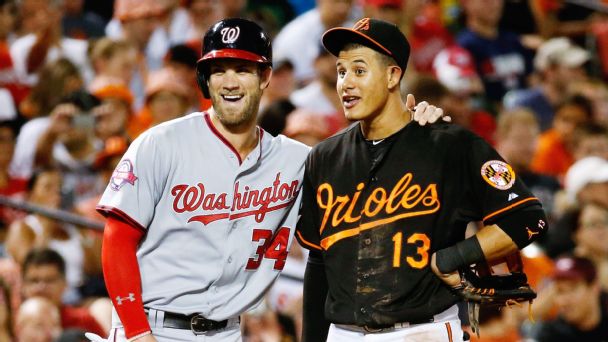 Just how "evil" can the Yankees get? Imagine this dream/nightmare 2018. Story »

“We have to,” CC Sabathia said. “Last year was last year. I don’t think we’re going to get any free passes like we did last year. This is our reality. We have to embrace who we and what we are, and that’s the Yankees and whatever comes with that.”

Gardner is the longest-tenured Yankee, joining the club in 2008. Along with Sabathia, he was part of the 2009 championship team.

“The last three or four years had obviously been tough,” he said. “We made the playoffs a couple years ago and lost in the wild-card game to the Astros, but for the Yankees and our fans, it had been a disappointment, and nobody [was] more disappointed than the players inside this room.”

Last year, however, it was like old times at Yankee Stadium.

“The way Yankee Stadium was last October, none of us that were on the field will forget, Gardner said. "I’d experienced that before, and it was good to feel it again.”

At the winter meetings, soon after the Yankees had acquired Stanton, Blue Jays manager John Gibbons quipped, “It’s the Evil Empire, right?” But he also acknowledged, “It is good for baseball. ... In our division, a lot of people like the way it is because people see those teams more, and they bring their big-star players.”

The Yankees also make other teams better. I’ve pointed out one reason the American League has dominated interleague play -- it has held the edge 14 consecutive seasons now -- is when the Yankees built their powerhouse teams in the late 1990s and early 2000s, the rest of the AL had to adjust to compete. After the Yankees added Stanton, the Red Sox would eventually sign J.D. Martinez, the Orioles would add Alex Cobb and Andrew Cashner to their rotation, and Gibbons’ Blue Jays added Curtis Granderson, Randal Grichuk, Aledmys Diaz, Yangervis Solarte, Jaime Garcia and Seung-Hwan Oh in a slew of moves to bolster their depth.

We’ve been blessed in recent seasons with some amazing storylines -- the small-market Royals ending 30 years of misery in 2015, the Cubs’ historic run in 2016, the Astros’ first title in franchise history in 2017. The past two World Series were seven-game affairs featuring two of the most exciting World Series games in history -- Game 7 in 2016 and Game 5 in 2017. The league is oozing with young talent, including the debut this year of Shohei Ohtani.

The thing about the Yankees’ Evil Empire tag for 2018, however: Are they really that evil? Other than Stanton, most of the team’s stars are homegrown. It felt like fans across the country embraced Judge last year. With his size and power, he’s fun and unique. As commissioner Rob Manfred suggested last summer, Judge is “a tremendous talent on the field, a really appealing off-the-field personality, the kind of player that can become the face of the game.”

That’s part of what makes the Yankees so fascinating for 2018. You can still hate them and yet can’t wait to see what Judge and Stanton and Sanchez will do. You can root against the Yankees with every fiber of your being and yet still pay attention. That’s all good for the baseball business.