NEW YORK -- It's J.D. Martinez's first trip to Yankee Stadium as a member of the Boston Red Sox -- and he already knows the drill.

"Big series; rivalry; yeah, you know, it sucks; it's gonna be intense; the fans are going to be nuts," Martinez said before Tuesday's Game 1, listing off answers, tongue-in-cheek, to questions we hadn't even had a chance to ask yet.

"It's just another series to us; another division series; yeah, they're hot, but ..." he continued with a laugh. "Did I answer them all?"

From the brawl to the Bronx 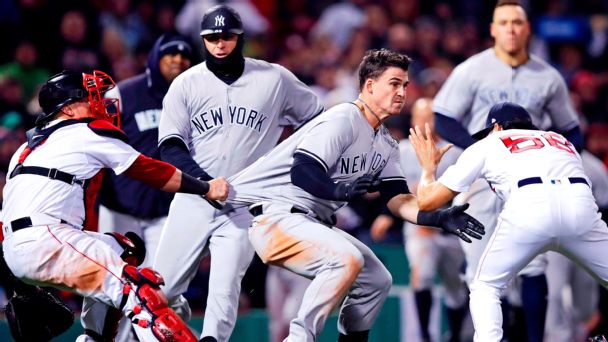 Your guide to this week's Yankees-Red Sox showdown. Harvey »

That's close enough. Still, this week there seems to be something a little more special about Yankees-Red Sox than usual, particularly with young stars and rookie managers on each side and the rivals both playing .700-plus ball. It's the latest in any season these two teams have met with such high winning percentages, and the last time they played, in April, a benches-clearing melee erupted at Fenway Park -- bringing back some of the bad blood that has helped define the rivalry.

Players and coaches in both clubhouses say this week's series is particularly fun. And it's fun for the fans, who made for a truly playoff-like atmosphere during a 3-2 Yankees win Tuesday night in the Bronx, loudly booing Boston starter Drew Pomeranz during a prolonged mound visit to treat a broken fingernail and chanting brawl-star Tyler Austin's name when he came to the plate in the second. Later, the crowd absolutely let Red Sox reliever Joe Kelly -- who drilled Austin in the back to help incite the brawl -- have it as he entered the game in the seventh. At times -- like when Aaron Judge nailed Christian Vazquez, trying to stretch a single into a double, with a strong throw from right field in the third inning -- it was about as loud at Yankee Stadium in May as it was this past October.

"This place is alive. I lived it last year during the playoffs," said Red Sox manager Alex Cora, who faced the Yankees in the 2017 American League Championship Series as the Houston Astros' bench coach. "They're showing up early, and they're loud."

And it was just as loud when Judge hit the eventual winning single in the seventh -- off Kelly.

"It's probably more like the playoffs, as far as the atmosphere," Kelly said afterward about his hostile reception. "Any time you pitch in the playoffs, it's very similar. So it's fun."

There are some players who say it's business as usual, just another series. But the energy in the ballpark -- not to mention the local television ratings; Tuesday's tilt was the YES Network's most-watched game since Derek Jeter's farewell in 2014 -- tells a different story. And for Yankees catcher Austin Romine and center fielder Aaron Hicks, it's simply "must-see" MLB.

"People want a little more when they’re watching a game. The rivalry between the Red Sox and Yankees is incredible," Romine said. "It’s a fun one. And it just adds a little more to play in these games. We only play a game, but at the same time, there’s a little more added and it makes for good watching, nice TV."

Keep the Yankees in the yard

Can you K the Yanks? It's your turn to pitch to Judge, Stanton and Sanchez. Play the game »

Said Hicks: "It’s just good baseball. The teams. The youth, the veteran leadership that both teams have. And the fact that it’s a rivalry. It’s been a rivalry for years. That makes it must-see."

For Boston center fielder Jackie Bradley Jr., it's simple: "[We're Nos.] 1 and 2 in baseball right now. The two top teams, playing each other, that happen to be in the same division."

Tough luck for the two best teams in baseball, maybe, but very good fortune for the sport.

"A couple times I said to guys on the bench, I said, ‘I forgot how fun these were,'" Yankees manager Aaron Boone said. "You’re going up against a team like that that’s really good, that’s got a lot of really good players. That was a fun one tonight."

"Both teams are playing really hard, they’re at the top of their division, good pitching staffs, good hitters on both sides. And the rivalry is still there," Yankees shortstop Didi Gregorius said.

It'll be there all year. And next year it'll be in London.

"It's awesome," Cora said, "that the baseball world is watching."