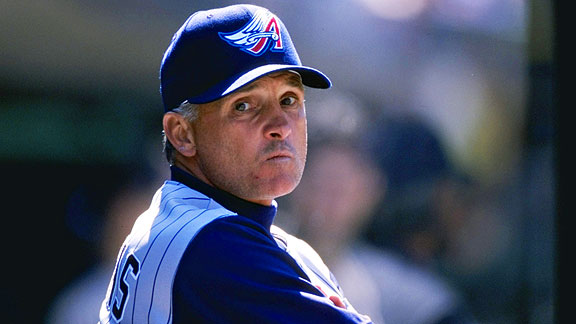 Terry Collins has endured his fair share of pennant race stress as a big league manager.

If you’re a Mets fan still reeling from the agonies of the 2007 and 2008 finishes that left the Mets one game, your new manager can empathize. He’s got a few horror stories of his own.

Four times in six years, Terry Collins took a team into contention for a playoff spot in September. Four times that team did not go to the postseason. Here’s a quick review:

Collins first foray into pressure baseball came with an Astros team that featured Jeff Bagwell and Craig Biggio in the prime of their careers.

Houston had a team well-suited to the Astrodome and won with smallball. Five players stole 20 or more bases and the Astros led the NL in batting average and finished second in runs scored. No starting pitcher dominated, though a youngster named Mike Hampton led the team in ERA.

Been There, Done That

In the inaugural year of the wild card, Houston fought neck-and-neck with a host of teams all the way to the final days of the season. Though the Astros went 17-11 in the final month of the season, the turning point came in the final week when they dropped three straight extra-inning games.

Among them were a pair of excruciating defeats against the Cubs, the first in which they led 6-5, 7-6, 9-7, 10-9 and 11-10 … and lost a game better known for a fan coming out of the stands and attacking Cubs pitcher Randy Myers (coincidentally, eight former or future Mets were a part of that Cubs rally, including winning pitcher Anthony Young). The next day, the Astros led 3-0 in the ninth inning … and lost again. In both instances, a win would have tied them for wild card lead.

“I’m at a loss for words,” Collins would tell the media afterwards.

Houston would win each of the next two games but would end the season one game shy of the Rockies for the wild card spot.

The second go-round for Collins was one in which the Astros entered September with a 2 ½ game lead in the NL Central. This teamnot only had Biggio and Bagwell, but got strong years from Derek Bell and Sean Berry (the original Killer Bs) and hard-throwing lefty Billy Wagner, who earned nine saves in his rookie season.

This would begin a familiar pattern for Collins. His teams don’t have a history of finishing strong. This one went 8-17 in September, lost its division lead when the Cardinals swept them three straight in Early September, then were sent reeling for good with a nine-game losing streak, one that ended with a win against the Mets that proved to be too little too late, again. Houston finished 82-80, six games off the division lead, eight games out of the wild card.

After being fired by the Astros, Collins took his talents to the Angels, who spent much of the season in a race for the AL West crown with the Mariners. This was an Anaheim team that featured an aging Rickey Henderson and Eddie Murray, and was paced by young stars Tim Salmon, Jim Edmonds and Garret Anderson.

Again, Collins had a team that was in great position in the month of September. Again, his team faded. The Angels went 10-15 in the final month, opening with a five-game losing streak that took them from being one game out to being five back. They would be closer than that for one day the rest of the way, finishing six games out at 84-78.

Collins last venture into a pennant race was one in which his team, again headed by Edmonds and Salmon, spent 84 days in first place, but couldn’t finish the deal. Again, it was a fight that ended with his team getting knocked out.

The Angels were 2 ½ games up on the Rangers for the AL West lead entering September and closed the season by going 9-15. They played five games against Texas in the final month and lost all five.

The killer was a showdown with the Rangers in the final week of the season in Anaheim, one that took place while the Mets were busy gakking up a lead of their own in the NL wild card race.

The Rangers and Angels entered the series even in the standings, though you wouldn’t have known it by how the games ended up. Collins and company lost to Texas 9-1, 9-1, and 7-1 and their AL West hopes were done.

“It was ugly, ugly, ugly,” read one story from the local papers describing the sweep, one that ended with Collins flipping his Angels cap into his office trash can in frustration.

It would only get worse. A year later Collins would face a team mutiny, with players asking he be fired. He hasn’t managed in a major league pennant race in the states since.