THOUSAND OAKS, Calif. -- The lively back-and-forth between Sean McVay and Matt LaFleur inside the meeting room at the Los Angeles Rams' practice facility made for explosive offense and a lively environment.

As the head coach and playcaller, McVay wanted to install a play into the game plan one way. LaFleur, the offensive coordinator, would insist on some sort of variation. And after the fact, LaFleur wouldn't hesitate to criticize McVay if he made a bad call.

Neither coach would easily yield, so the banter would continue.

"He and I never battled each other -- just kidding," LaFleur deadpanned this week. "Every day was a battle."

"He told me what I needed to hear, and it was good," McVay said. "Even though sometimes we wanted to choke each other out." 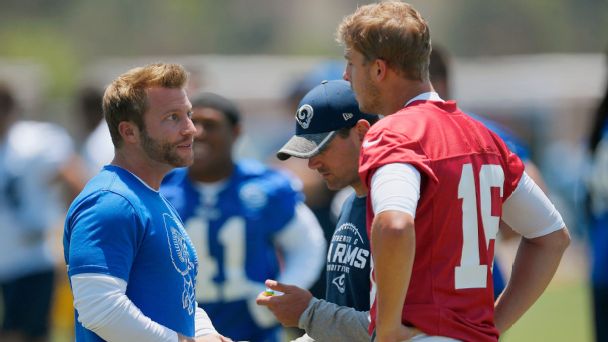 A look at offensive players and assistant coaches who have worked with Packers coach Matt LaFleur and Rams coach Sean McVay.

That was 2017. When McVay and LaFleur arrived in L.A. to lead an offensive juggernaut that turned a stagnant franchise into a division winner.

Three seasons later, McVay and LaFleur will battle it out again Saturday, but from opposite sidelines, when the Rams (10-6) play LaFleur's NFC top-seeded Green Bay Packers (13-3) in a divisional-round playoff at Lambeau Field (4:35 p.m. ET, Fox) in their first battle as head coaches.

"That's one of my closest friends in life," LaFleur said about McVay, who will turn 35 later this month. "I love him like a brother."

The feeling is mutual.

"I love him," McVay said. "He's like my big brother, and we've been close for a long time."

The two met in 2010 with the Washington Football Team, where they worked as assistants under head coach Mike Shanahan and offensive coordinator Kyle Shanahan. LaFleur knew the first time he met McVay that he had a bright future.

"I'll never forget when Coach Shanahan and Kyle were interviewing him," LaFleur said. "My office kind of butted up to the offensive staff room, and I could kind of hear them through the wall and just the excitement and enthusiasm and energy he had in his voice."

Together for four seasons in Washington, their relationship grew beyond the confines of the practice facility. They lived across the street from each other, and McVay often would drop in on LaFleur and his wife, BreAnne, for meals.

"I'd come third-wheel it with them a lot," McVay said. "They kind of took me under their wing."

Their paths diverged when LaFleur departed to become the Notre Dame quarterbacks coach in 2014, then took the same job for two seasons with the Atlanta Falcons. When McVay was named coach of the Rams in 2017, he snagged LaFleur to join him.

"[LaFleur] did a great job with me in that second year, really pouring into me and giving me everything he had," said Rams quarterback Jared Goff, referencing his second NFL season, when he passed for 3,804 yards and 28 touchdowns with seven interceptions. "That's what I've always appreciated from him, is how hard he coached me and how hard he worked me and how much he believed in me."

Goff smiled when he thought about the dynamic of the McVay-LaFleur relationship.

"They're really close and would get after each other a little bit sometimes," Goff said. "But I know they're as close as anyone, and I think that's just how it works. You guys all have brothers and sisters, you know how it gets sometimes."

"It [was] a great match being with them," Rams wide receiver Robert Woods recalled. "High-energy guys, competitive practices, but really just pushing our offense to be the top offense."

However, after one season in L.A., LaFleur departed for the Tennessee Titans, where he'd have the same title and be able to call plays. After just one season, the Packers named LaFleur head coach.

"Definitely saw it coming with his offensive mind," Woods said about LaFleur's head coach potential. "But really my experience with him was just his connection with the pass game, encouraging his players, building confidence and really encouraging guys to be at the top of their game."

The 41-year-old LaFleur has now coached the Packers to back-to-back playoff appearances, earning the NFC's top seed this year. Behind future Hall of Fame quarterback Aaron Rodgers, the Packers have the NFL's top-ranked offense, scoring an average of 30.81 points per game.

The Rams this season have been plagued by inconsistencies on offense and, since Week 17, uncertainty at quarterback, as Goff continues to recover from Dec. 28 surgery on his throwing-hand thumb.

But the Rams likely won't have to rely on scoring at an aggressive pace if their top-ranked defense, which is allowing an average of 18.5 points per game, can affect Rodgers, slow down receiver Davante Adams and score. Since Week 12, the Rams' have scored five defensive touchdowns, the best in the NFL.

McVay and LaFleur anticipate they'll see some familiar looks from each other's offense.

"I joke with him about running plays that we ran the previous week the next week, and I'll steal from him, too," McVay said.

But both insist Saturday's matchup is the Rams versus the Packers, nothing more. After all, playing old friends has become old hat for each.

Both have faced their former boss from Washington, Kyle Shanahan -- the head coach of the San Francisco 49ers -- multiple times, and he's gotten the best of them.

Shanahan's squad has won four straight over McVay and the Rams, while the 49ers routed the Packers in the regular season last year, then delivered a knockout in the NFC Championship Game.

"He's a great friend of mine," LaFleur said about McVay, "but the gloves will be off on Saturday."