The Los Angeles Rams claimed the NFC West title all the way back in Week 13, so it's appropriate that they take home half of the division awards handed out by ESPN reporters Brady Henderson (Seattle Seahawks), Lindsey Thiry (Los Angeles Rams), Nick Wagoner (San Francisco 49ers) and Josh Weinfuss (Arizona Cardinals). But the Rams didn't take them all.

Defensive MVP -- Rams defensive tackle Aaron Donald: He held out of training camp for two consecutive seasons, refusing to settle for less than his worth. With 10 days until the opener, Donald signed a six-year, $135 million extension -- including $87 million guaranteed -- to become the highest paid defensive player in NFL history (Khalil Mack signed a deal worth more the following day).

Then Donald overcame a sluggish start to go on a tear. He was held without a sack through the first three games, but finished the season with record-breaking numbers.

Despite dealing with double-teams on an overwhelming majority of snaps, Donald recorded 20.5 sacks to set a new NFL single-season record for a defensive tackle, since sacks became an official individual stat in 1982. His 20.5 sacks also set a new Rams franchise record.

Against the 49ers in Week 7, Donald set a new career best with four sacks.

"I've had some pretty good players," said Wade Phillips, the Rams' 71-year-old defensive coordinator. "But he's certainly right up there equal or better."

Donald earned his fifth Pro Bowl honor in five seasons and, while considered an outsider in the MVP race, is the favorite to repeat as the NFL's Defensive Player of the Year. -- Lindsey Thiry 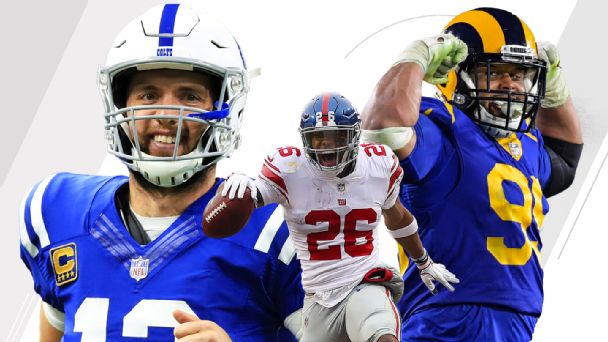 Some postseason awards are easy to pick -- defensive player of the year in the NFC West? It's easily Rams DT Aaron Donald. Other awards? Wide open.

Offensive MVP -- Rams running back Todd Gurley: Before the start of his fourth season, Gurley signed a four-year contract extension worth $60 million, with $45 million guaranteed, to become the highest-paid running back in NFL history.

He certainly proved his worth in the Rams' high-scoring offense.

Despite sitting out the final two regular-season games because of a sore knee, Gurley scored a league-best 21 touchdowns, ranked third with 1,251 rushing yards and caught 59 passes for 580 yards. Among players who started more than three games, Gurley ranked second in rushing yards per game, averaging 89.4.

Through 11 weeks, and a 10-1 start, Gurley was considered a serious contender in the MVP race. He rushed for a career-high 208 yards in a victory over the Denver Broncos. And he also set a new franchise record after he scored a touchdown in 13 consecutive games dating to the 2017 season.

"I've said it a handful of times," quarterback Jared Goff said. "I'm very thankful to have him next to me and be able to play alongside him for hopefully a long time."

Gurley was named to his third Pro Bowl. -- Lindsey Thiry

Rookie of the Year -- 49ers offensive tackle Mike McGlinchey: When the Niners used the No. 9 overall pick on McGlinchey in the 2018 draft, they also traded away incumbent right tackle Trent Brown. Brown had established himself as a top-tier pass protector but didn't give San Francisco what it sought in the run game. So, the Niners jettisoned Brown and pulled the trigger on McGlinchey even with some highly rated defenders still on the board.

The immediate returns on McGlinchey have been positive, particularly in the area most expected, the run game. For what it's worth, Pro Football Focus rates McGlinchey as one of the best run-blocking tackles in the league, and the statistics are there to support it. While there have been some hiccups in pass protection, McGlinchey hasn't backed down despite facing the likes of Aaron Donald, Khalil Mack, Von Miller, Melvin Ingram and other elite edge rushers.

"When you say Von Miller's coming to town, he doesn't fret, he doesn't treat the week any different," cornerback Richard Sherman said. "He goes out there, blue-collar, does his job. You say, Khalil Mack's coming to town, he's just going to go out there and do his job. He's so consistent, he's so levelheaded, I don't think he worries about who the opponent is. He worries about his technique and the things he can control. That's really incredible to see as a rookie."

McGlinchey's strong rookie season will fly under the radar, mostly because of the position he plays. But he did enough to solidify himself as a franchise building block with an eye toward becoming the eventual replacement on the left side when Joe Staley retires. -- Nick Wagoner

Coach of the Year -- Seahawks' Pete Carroll: Of all the coaching challenges Carroll has faced since he came to the Seahawks in 2010, this year's might have been the toughest.

It's not as though the Seahawks are devoid of stars -- not by a long-shot -- but in the 12 months between Cliff Avril's career-ending neck injury last year and Earl Thomas' broken leg in September, Seattle lost seven Pro Bowlers (Avril, Thomas, Kam Chancellor, Richard Sherman, Michael Bennett, Sheldon Richardson and Jimmy Graham) and has played most of this season without an eighth (K.J. Wright).

Carroll has gotten 10 wins and another playoff berth out of a roster no longer loaded with blue-chip talent. It's why he's the choice for Coach of the Year in the NFC West -- and why he's a candidate for the league-wide award.

Carroll's case also includes the decisions he made while overhauling his coaching staff, even if it wasn't completely his choice to fire coordinators Darrell Bevell and Kris Richard, plus offensive line coach Tom Cable, among several other assistants. With Brian Schottenheimer calling plays and Mike Solari in charge of the O-line, Russell Wilson is having arguably his best season, and Seattle leads the league in rushing. The defense has been statistically average under Ken Norton Jr., but average is pretty good given that most of the lost firepower came on that side of the ball. -- Brady Henderson