There should be no doubt. The NFL's mythical MVP (through Week 6) award should go to New England Patriots quarterback Tom Brady. (He has won two traditional MVP awards, in 2007 and 2010, and countless midseason nominations, but has Brady ever received an illustrious pre-midseason honor? I think not.) 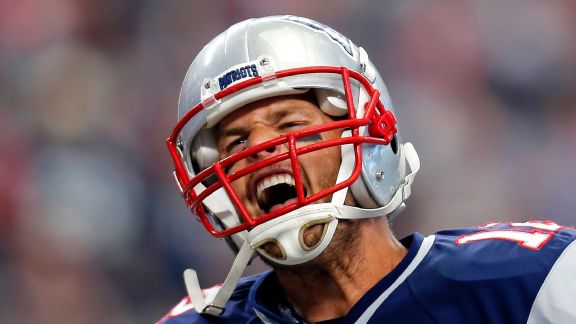 Here's how our NFL Nation network of 32 reporters voted:

I'm on board with nearly 60 percent of ESPN's NFL Nation reporters who named Brady as the league's best player in voting this week. Three other players received votes -- Green Bay Packers quarterback Aaron Rodgers, Cincinnati Bengals quarterback Andy Dalton and Atlanta Falcons running back Devonta Freeman -- but none have hit Brady's level to this point.

Oh, what the heck. For the fun of it, let's flesh out the Brady argument and then run through arguably the 10 most valuable players of the season's first six weeks.

Brady isn't just the quarterback on the NFL's top team, as determined both by ESPN's Power Rankings and Football Power Index. He's playing with a steely precision unmatched throughout the league. His 70.6 completion percentage leads all qualifying quarterbacks (with at least 100 attempts), and his only interception came on a pass that bounced off receiver Julian Edelman's hands. Of his 197 attempts, 14.7 percent have been judged via video analysis to be off-target. That's the fourth-lowest rate among quarterbacks. When it's said that a quarterback is "focused," this is what they mean.

In addition to throwing 14 touchdown passes against two interceptions and compiling the NFL's highest Total Quarterback Rating (84.2), Dalton has produced remarkably consistent results on deep passes. His 64.1 percent completion rate on throws of at least 15 yards leads the NFL. He's also completing 58.3 percent of throws that travel at least 20 yards in the air, also a league high, in leading the Bengals to a 6-0 start.

The trendy and accurate description of the reigning NFL MVP is that he is playing the position at a graduate level. One example: Rodgers has completed all six of his passes, for 210 yards and a touchdown, when drawing opponents offside. No one is close to as good as Rodgers at capitalizing on those free plays. The Cleveland Browns' Josh McCown is the only quarterback with more than one such completion.

The Arizona Cardinals are favorites to win the NFC West in large part because Palmer is healthy and dealing in Bruce Arians' offense. His QBR (79.6) ranks fourth in the NFL, and his 14 touchdown passes are tied for second. But his command of the position has been most evident on play-action plays. He's completing 80 percent of such passes and averaged 12.7 yards per attempt on them, best in the league.

Ryan hasn't had the fantasy numbers of some other candidates. His eight touchdown passes are tied for 14th in the NFL, and his average of 291.8 yards per game ranks sixth. But his impact on the Falcons' 5-1 start is clear. Ryan has led four fourth-quarter comebacks -- two more than anyone else in the league -- including three game-winning drives. His QBR in the fourth quarter/overtime is 89.3, the NFL's third highest.

The San Diego Chargers are 2-4, and in playing catch-up against big deficits, Rivers leads the NFL in yardage (352.7 yards per game), completions (177) and attempts (253). He has done it via a short, efficient passing game that has largely replaced the Chargers' running offense. Rivers has completed 82 percent of throws that travel 5 or fewer yards past the line of scrimmage, second in the NFL, and averages a league-high 8.2 yards per attempt on them.

Finally, a non-quarterback! Freeman's 801 combined yards (505 rushing, 296 receiving) leads the next-best running back by more than 100 yards. He has produced a league-high 42 first downs, eight more than anyone else. Freeman is averaging 4.76 yards per carry and 9.25 yards per catch, averaging out to a stunning 5.8 yards for each of his 138 total touches.

The third member of the Falcons' MVP triumvirate has been slowed the past two weeks by injury but still ranks second in the NFL in yards (638) and first downs via catch (34). Ryan is targeting him on 32.9 percent of Jones’ routes, the third-highest percentage among NFL receivers, a testament both to their chemistry and Jones' ability to get open against defenses focused on him.

It's impossible to ignore Hopkins' historic pace with arguably the worst quarterback arrangement in the league. Some production has come with the Houston Texans in deep deficits, but he still leads the NFL in yardage (726) by a wide margin. Hopkins is well beyond the pace Calvin Johnson set in 2012 en route to breaking Jerry Rice's 16-game yardage record. Through six games of that season, Johnson had 592 yards.

Yep. The classic journeyman deserves his share of credit for the New York Jets' 4-1 start. (Their defense and coaching deserve more, but play along here!) More than anything, Fitzpatrick has ensured the Jets' success at their best opportunities. His 99.8 QBR in the red zone -- thanks to eight touchdowns passes, one touchdown via rush, no interceptions and no sacks -- is the NFL's best.

Jacob Nitzberg of ESPN Stats & Information contributed to this report.