It’s a Friday afternoon in Georgia and the cameras are rolling. The last day of work after a grueling fall week, hours upon hours spent trying to be as creative as possible, as believable as possible. The weekend, of course, is a popular conversation topic.

Sundays are a hot topic in the fall when the crew of AMC's “The Walking Dead” starts to reveal its passion. Clothing with skulls on it is replaced by Atlanta Falcons jerseys, Denver Broncos T-shirts and Green Bay Packers paraphernalia.

It’s here where Josh McDermitt can’t contain himself, as much as he might want to try. McDermitt, who has portrayed Dr. Eugene Porter since 2014, starts running his mouth. Once he realized the level of NFL fandom on the set, the lifelong Packers fan and current team shareholder began to talk trash.

“There are a few Packers fans, and we band together and talk about how we are going to get over on this guy or this guy this week,” McDermitt said this summer at the Motor City Comic Con. “I don’t do any fantasy stuff, either, so this is my fantasy football.

“This is my opportunity to compete and trash-talk the fans of other teams, stuff like that. It’s fun. I really enjoy that.”

The rest of the week is as expected. They’ve got a show to create, and the season premiere is Sunday. But Fridays, it starts. McDermitt has no problem chirping at Greg Nicotero, an executive producer, director and rabid Pittsburgh Steelers fan. Jeffrey Dean Morgan, who plays Negan, is a die-hard Seattle Seahawks fan who can be merciless with his ribbing. The biggest fan base belongs to the Falcons -- no surprise considering the majority of the show is shot in and around Atlanta -- but a bunch of teams have representation, including the Detroit Lions, Chicago Bears, Tampa Bay Buccaneers and Denver Broncos. No one, from a set medic who is a vocal New England Patriots fan to Nicotero and McDermitt, is above getting guff.

McDermitt will sometimes start with friendly Cubs conversation before hammering a Bears fan who also happens to be in charge of making him look good on camera. Or they’ll start talking about “The Walking Dead” football pool, which some weeks can number more than 100 participants.

“It’s usually like, ‘Oh, what are your boys going to do this weekend?'" Nicotero said. “That’s how it starts. They always pretend to have an innocent conversation, but they are really sort of looking for a way to put the knife in.

“Or maybe in our case, a machete, who knows.”

It can get vicious. Nicotero said he once threatened -- but didn’t follow through -- to pull someone from a scene because he was riding the Steelers so hard. McDermitt compared most chatter to “a chess game” because of the strategy of wit and the line coworkers try not to cross while explaining superior fandom.

“It always ends up becoming that kind of situation where you’re going to trash-talk and put them down because you want to psychologically break them in case their team does win,” said Nicotero, who admitted he’s responsible for a lot of the chatter. “It’s fun. It’s a great opportunity to kind of bond people together in that shared interest.”

If it sounds like your office on Friday afternoons or your group of friends, it’s a pretty good baseline. There’s a difference, though. While “The Walking Dead” workers are fans of the NFL, those players they watch are also familiar with their work. 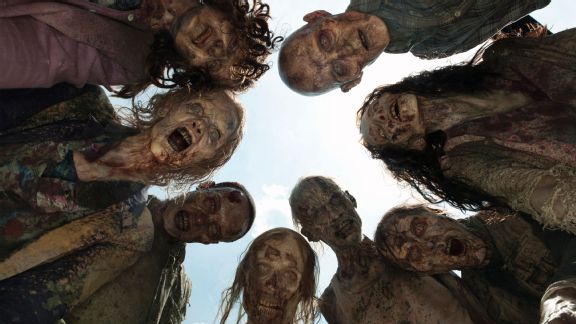 • 'The Walking Dead' cast, crew bleed NFL colors
• If you watch a Packers game with Josh McDermitt, keep it down
• Broncos loyalty of 'Walking Dead' star dates back to Elway mullet
• From Steel Curtain to 'The Walking Dead,' loyalty runs deep in show's director

The relationship between the most popular sport in the United States and one of the most powerful shows on television is strong. In locker rooms around the league, much like in offices and schools across the country, "The Walking Dead" is a conversation starter.

“Most of the guys just love gross, nasty stuff, man,” Lions cornerback Darius Slay said. “And we love stories. I just love the story, and I love gross and nasty stuff. It’s like a little romantic, and then it’s like, ‘Who is gonna die next?’

There’s a similarity there, both in the physicality of the television show and the brutality of pro football.

It’s the drama that makes both the NFL and “The Walking Dead” compelling to watch.

“If I had to guess, 'The Walking Dead' is about survival,” said Ross Marquand, who has played Aaron since 2015. “And I think if you think about what the NFL is really all about, it’s pretty similar. It’s all about not only surviving week to week, but season to season.

“Some of these guys, whether they come up against career-ending injuries or just the mere pressure of being at a high level of performance week in and week out must be so hard on your body and your mind. Those guys, when they see that in the show, they recognize it’s all about survival.”

There’s mutual admiration, too. Two-time Super Bowl champion Hines Ward appeared on the show as a walker. Former Steelers running back DeAngelo Williams held a regular wedding -- and then a "Walking Dead"-themed wedding -- on back-to-back days last year. Slay has expressed interest in appearing on the show, and McDermitt said Packers offensive linemen Bryan Bulaga and Corey Linsley have, too. That could be awkward because zombies need to look emaciated, not as though they'd just feasted on dozens of humans. Even on a surrealist show about fictional walking dead, there needs to be some level of reality.

You'll enjoy this even if you're not a fan of @TheWalkingDead (and hey maybe they'll have me on the show now)...https://t.co/kMafweVH1q

McDermitt has interacted with many Packers, and Marquand has heard from multiple players interested in being on the show. Lions tight end Eric Ebron said he met Steven Yeun -- a massive Lions fan, who played Glenn from 2010-16 -- a couple of years ago and it made him even more engaged with a show he watched weekly. Yeun and Nicotero have gone to Falcons games and ended up on the field. Nicotero and some show staff were invited to a Cowboys game on a Sunday and arrived back in Atlanta at 2 a.m. on Monday, and were on set hours later.

Michael Cudlitz, who played Sgt. Abraham Ford from 2014-17, remembers running into NFL players in hotel lobbies and being surprised they knew who the cast was and how excited they were to meet the actors.

“We get that all the time, where we bump into anyone who is a celebrity or someone that we think holds some type of status, whatever that means, and you bump into them and they recognize you and you’re like, ‘Oh wait, that wasn’t how I thought that was going to go down,’” Cudlitz said. “You have a guy who can literally take you apart and he’s like, ‘Dude, you’re a f---ing badass.’

“I’m like, ‘You could literally kill me. I’m really not. You’re an actual badass. I just play one on television.’”

Sundays from September to November, typically when the show is in production during football season, turn into massive watch-and-text parties.

Marquand and a group of Broncos fans, including co-executive producer Denise Huth, have frequent conversations and will sometimes head to Taco Mac, a local chain restaurant, to watch games. McDermitt and Yeun were game-watching partners. Nicotero will often have people at his house or go to a local bar.

He also has a group text with other directors and producers that becomes constant dialogue on Sundays -- both during production and after wrapping for the season -- keeping the banter alive.

With a show like “The Walking Dead,” the unpredictability can cause football-watching problems, too.

When Yeun was killed off, McDermitt lost one of his biggest trash-talk partners and the person he’d often watch games with. When Nicotero, who has to pace during Steelers games to get out his nervous energy, found out that Hershel was being killed, he didn’t know what he was going to do.

“When I heard that Hershel was dying on the show, my first response was, ‘Well, who the f--- am I going to watch football with on Sundays now,” Nicotero said. “You can’t kill Hershel, that’s my football buddy.”

But it’s that unpredictability that has led to the show’s popularity, and to cause something no one could have predicted when the show started in 2010. When “The Walking Dead” goes up against "Sunday Night Football," it will occasionally do something no other program has been able to do.

It has beaten the NFL.

The fall debuts of the show the past three seasons have beaten SNF in the key demographic of adults age 18-49. Some of the show’s actors will record their show if their favorite team is playing, and some players will choose to watch “The Walking Dead” instead of the NFL after competing earlier in the day.

It is. But it has company.