The NFL has been trying to reach families with its "Football is Family" advertising campaign for several years now, but rarely is the focus on a certain segment: twins. 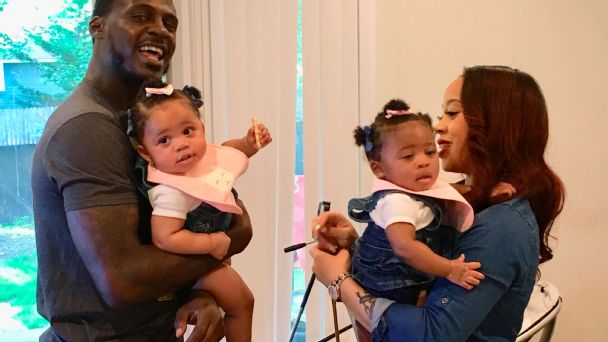 • Photos of NFL dads with twin children
• Bill Belichick on the McCourty twins
• Quiz: How well do you know twin athletes?

Friday marks a celebration of "National Twins Day," and what better way to show the cuteness off than to highlight photos from a smattering of NFL players and their twin children.

We obviously can't include every active NFL player and his set of twins, nor could we possibly go back and include retired players.

There is a long list of notable former players who have double the fun, including: Michael Strahan, Kurt Warner and Brian Dawkins, who each have twin daughters; Curt Warner, Nick Folk, Paul McQuistan, DeAngelo Hall, Kyle Vanden Bosch and Chris Johnson, who have twin sons; and Rodney Peete, Peyton Manning, Donovan McNabb and Antonio Cromartie, who have boy-girl twins.

Last but not least, there's NFL commissioner Roger Goodell and his twin girls.

Here's how our search among active players turned out:

This is seriously what life is all about. #family #nobettergiftinlife #footballisfamily

Happy Birthday Ted and Kyrsten the big 8 enjoy the day

Got to experience something I'll never forget today! Having your family their to support you during camp, and my two amazing kids running on the field to see daddy after practice. My family makes so many sacrifices for me to play this game and I am so grateful for them! #chase #parker #family #squad #trainingcamp @ashleykayhogan #pats

What makes this heart beat ❤️

Always a treat when the fam comes to camp. ❤️

W! + some post game love from the squad! Love this crew! #fambam #mysquad