RENTON, Wash. -- It's a late-August afternoon at the Seattle Seahawks' lakefront headquarters, and practice is not over yet for some.

While the rest of the team has made its way off the field and inside the Virginia Mason Athletic Center, a pair of pass-rushers -- rookie sixth-round pick Jacob Martin and free-agent addition Barkevious Mingo -- remain. Clint Hurtt, the defensive line coach, is putting them through some extra work. Pete Carroll is there, too, instructing as much as he's observing.

The scene illustrated much of what's different about the 2018 Seahawks: their newness and youth on defense, what that means for Carroll and why the NFL's oldest coach appears rejuvenated even after an offseason that had to rank among the most difficult in his nine with the Seahawks.

Consider what all went down.

A look at the major departures from last year's Seahawks:

First, Carroll -- perhaps not completely by choice -- fired his offensive and defensive coordinators, his O-line coach and a handful of other assistants in the most significant overhaul of his staff since he arrived in Seattle. Then came the purging of some of the most important players in franchise history, followed by the parting shots aimed in Carroll's direction from two of them, Richard Sherman and Michael Bennett, who had either said or implied that his message had grown stale with the team's older players.

Carroll's Seahawks, 0-1 heading into Monday night's game against the Chicago Bears, are no longer considered the NFC heavyweights they were for the past several seasons. Their offseason retooling has left them younger in several spots, which was evident in their season-opening defeat to the Broncos in Denver.

Carroll has had his coaching challenges throughout the years: Percy Harvin's volatility in 2013-14; managing the attention that followed Seattle's Super Bowl victory and then navigating his players through the aftermath of a devastating Super Bowl loss; and handling what became increasingly difficult relationships with Sherman and Marshawn Lynch, to name a few.

The challenge this season: trying to remain competitive with a roster no longer as loaded with established talent, one whose once star-studded defense is more reliant than in recent seasons on unproven youth. How quickly can Carroll and his staff turn inexperienced players into productive ones?

After that August postpractice instruction had finished, Carroll was asked about the new-look secondary that was once the face of Seattle's defense.

"We're in a creation mode with these guys more than we're in kind of a maintenance mode that you would be with guys that you've had before," he told ESPN. "Once guys have played with us, they establish habits and things, and then we need to adjust them and hone their skill. This is more like the creation part of it.

"You're doing the sculpting right now."

'It was time for these guys to move on'

Carroll remembers the look on John Wooden's face and the feeling it instantly gave him. It was during one of Carroll's first few seasons at USC that he began visiting with the legendary UCLA basketball coach.

"Every year I was trying to think of a question to ask him when we would get together in the springtime," Carroll recalled. "And I said, 'Coach, how much do you change your philosophy from year to year?' And he looked at me and I felt like, 'Oh man, I feel like a dumbass. Why did I ask that question?'

"He said, 'Coach, you don't change your philosophy. Your philosophy is what it is, and the players change.' That's what makes it seem different sometimes. The philosophy always stays the same."

In the past, players have lauded Carroll's consistency, how he's the same person with the same attitude every day. But Sherman, who had spent seven seasons with Seattle, criticized part of that consistency when he said after his release that Carroll's ways are better suited for college, where rosters turn over every four years. Bennett, who was dealt to the Philadelphia Eagles, told Sports Illustrated that he started to read books in team meetings last season because he had heard all of Carroll's jokes and anecdotes, although he later clarified to The Seattle Times that it was only in rookie meetings that he wasn't required to attend.

"We had kind of heard all his stories, we had kind of heard every story, every funny anecdote that he had," Sherman said. "And honestly because he just recycles them. And they're cool stories, they're great for team chemistry and building, et cetera, et cetera. But we had literally heard them all. We could recite them before he even started to say them."

Carroll brushed off the comments, describing them as something of a coping method.

"I'm not sad. I'm not surprised, though," he told KIRO-AM 710 ESPN Seattle. "We've just been through so much, and I know where their head is at and they're looking at stuff and they can go from one moment to the next and see things a little bit differently; it can change for them, and they're battling. They're out there battling for their own sake. It would be nice if they saw it differently. I see it differently than they saw it."

Carroll added: "Regardless of what they say, I'm not gonna be that petty about it. ... Somewhere down the road everything will be fine. I'm not worried about it."

And in making the point that players have to remain engaged, he hinted loudly that the decisions to move on from Sherman and Bennett were influenced by their attitudes and not just the usual factors of age, production, injury and salary.

Only seven players -- Russell Wilson, Doug Baldwin, Earl Thomas, Bobby Wagner, K.J. Wright, Justin Britt and J.R. Sweezy -- remain from the 2014 team that reached its second consecutive Super Bowl. It's why Baldwin says it's now a "young-guy team," and why he thinks Carroll is "being more of himself" this year.

"He's showing more of himself to us, telling more stories, just talking more about himself," Baldwin said. "Because it's a young team and he really needs these young guys to see who he is, where he's come from, the history of why he does the things he does. It's kind of like starting over again in some aspects."

When it started to become apparent late last season that the Seahawks might be headed for a drastic reshuffling of their roster, it raised speculation about Carroll's future. Would Carroll, who turned 67 this past week, be willing to wait however long it might take for the Seahawks to become championship contenders again?

The thing is, Carroll is the youngest 60-something you'll ever meet and probably thinks he could win with just about any roster.

He shot down the retirement speculation before Seattle's regular-season finale -- naturally, in a tweet complete with a dancing emoji.

People talking about retirement... I ain't old enough to think about retiring! 🕺

When the subject came up again during his weekly radio show, Carroll revealed that he had adopted a plant-based diet he says has changed his life.

His son Nate, the team's wide-receivers coach, had convinced Carroll and his wife, Glena, to give it a try during a family vacation last summer.

"We have gotten rid of gluten, we have gotten rid of dairy products and just cleaned it up and found that all of the old arthritic problems have gone away," Carroll told ESPN. "Really, something in there in the diet has helped in terms of the inflammation. It's startlingly different. Over my lifetime I've taken Celebrex and Vioxx and more Advil than I'd like to admit and all that stuff. I don't take anything anymore, and I don't need anything anymore.

"The diet has really changed everything."

Carroll was a safety during his playing days, then cut his teeth in college and the NFL as a defensive backs coach. As such, he always has been hands-on with the younger players in Seattle's secondary.

But there have been more young players to mold this year now that Sherman and Kam Chancellor are gone, (Thomas also missed all offseason while holding out.) One of them is rookie fifth-round pick Tre Flowers, a lanky college safety in whom Carroll has taken a special interest, dating all the way back to the pre-draft process.

Flowers is now starting at right cornerback after injuries to veterans Byron Maxwell and Dontae Johnson. It's not something many would have predicted in the spring, when Flowers was in the beginning stages of his position switch. 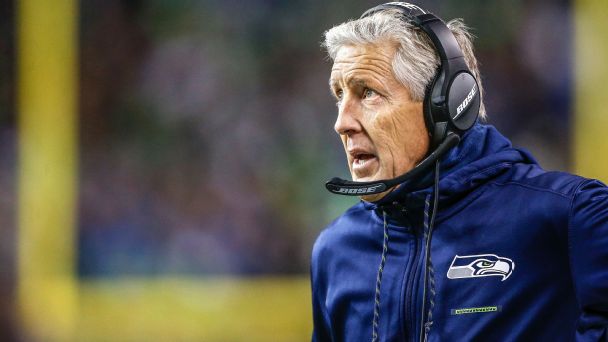 After a rookie minicamp practice in May, Carroll was asked what excites him most about working with young players. He mentioned a meeting he had earlier in the day with Flowers.

It brought Carroll way back.

"I'm coaching up a guy that's going to turn into a corner, and that meeting right there, you could have put me in that meeting 30 years ago," Carroll said. "Talking the same stuff and principles and concepts, trying to reach a young kid and help him understand what this is all about and what he's getting into and all of that. It was awesome. I felt like I was right back in the middle of all of it.

"There's this rejuvenation to every season that we have that's a remarkable part of our business that sometimes we don't talk about enough. The newness, the challenges, the unknown, the expectations and the uncertainty of all of it makes this very exciting. I don't feel any different about this than any season I can ever remember, but I feel more excited to have a chance to see this opportunity come to life. I'm very grateful and appreciative of it.

"I was right in the middle of it today, and I had to stop for a minute, 'Wow, here we go.' I'm trying to make this kid understand and it's something he's never heard before or seen before. It's pretty darn exciting. That's just the start of it, then we'll see it unfold in time. It's really fun. That's just one of those stories."