The NFL entered this season confronting a unique challenge. An inexperienced group of officials -- one that included four rookie referees -- would navigate the most complex set of rule changes and points of emphasis in recent memory.

The result in one word? Intense. During the first half of the season, we saw games dominated by discussion of roughing the passer, ejections and illegal contact. Meanwhile, three of the most anticipated revisions -- the catch rule, helmet rule and the reimagined kickoff -- largely slipped from the radar.

The unprecedented firing of down judge Hugo Cruz demonstrated limited patience despite this season's unique challenges. Nevertheless, flag totals are at their lowest rate (15.9 per game, including penalties that were declined or offset) since 2013.

So while we have a moment, let's update our preseason rules primer with new details where relevant.

Through the first eight weeks of the season, there were only eight flags thrown for a foul that the league hopes will have far-reaching impact on all levels of the game.

That development is unsurprising for those who were paying attention when the rule was implemented last spring, even after an active summer that featured 51 fouls in the first 33 preseason games. The path to that low number, however, was unexpected and unparalleled in recent history.

Officials are throwing flags for only the most flagrant instances of players lowering their helmet to initiate contact against an opponent. Instead, most offenders -- a total that has exceeded 70 -- receive warning letters, complete with video explanation. Some are getting fined. Only one player has received more than one warning letter. Overall, flags have been thrown on roughly 10 percent of violations.

This soft rollout is intentional and represents an acceptance of the fundamental change most players must make to avoid using their heads. The NFL doesn't expect players to change the way they play the game overnight. The flag numbers will rise eventually, but it might not happen until next season.

"In the offseason it's an easy thing to discuss and an easy thing to put tape to," said Rich McKay, chairman of the NFL competition committee. "But when you actually practice it, it's a totally different thing. Players are still trying to adjust because it's not the natural way that they have played the game over the last five years or in college."

The league hastened significant under-the-hood changes to the kickoff after internal research showed it was five times more likely to produce a concussion than the average football play. The two-man wedge was outlawed, as was the running head start provided to cover men in an effort to reduce the space and speed of ultraviolent contact between blockers and tacklers. 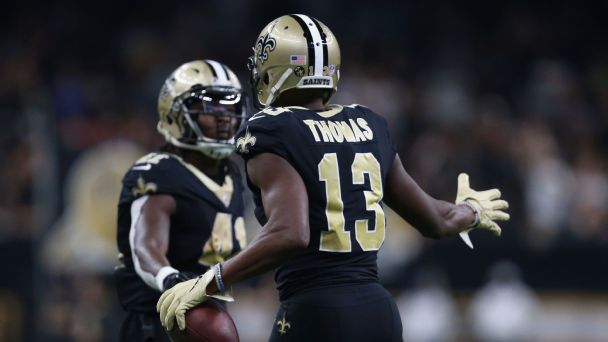 The play doesn't look much different to the naked eye, but the changes have had some notable effects.

Special-teams coaches were hoping for more returns and fewer touchbacks under the new arrangement, but the opposite has actually occurred. Internal data provided after seven weeks of the season showed that the return rate was lower (33.4 percent) compared to last season over the same period (40.6). The touchback rate was higher -- 64.6 percent, compared to 56.6 percent -- as well.

Why? Slightly more kickoffs landed in or beyond the end zone, up to 71.6 percent from 68.5 percent. That result could be random, or it could be a function of coaches feeling less confident that their coverage teams can get far enough down the field without the 5-yard head start they once had and kickers purposely taking away the return.

Speeds have actually increased, according to the seven-week league data. The average speed of players on returns increased 9 percent, to 14.3 mph. There was an 8 percent increase on touchbacks, to an average of 12.6 miles per hour. That speed might be the result of having smaller players on the field, a potential safety advantage. Without wedges, return teams aren't using as many defensive linemen. The presence of defensive backs increased, and the average weight of players on the kickoff return team dropped by 7 pounds.

The ultimate success of this change will be the extent to which the kickoff is a safer play. There were no concussions on kickoffs during the preseason, but regular-season numbers are not yet available. So it isn't yet clear whether the environment is safer.

This rule change was a provisional, one-year arrangement and must be re-evaluated by owners in the spring.

Revised standard for a catch

Receivers are no longer required to "survive the ground" when they fall during the process of a catch. After years of controversial reversals that contradicted the eye test, the NFL appears to have found a reasonable alternative. A catch now requires three elements: control, possession in bounds and a move common to the game (or the ability to make one) such as a third step.

That linguistic maneuvering prevents incomplete rulings when a receiver loses control on the way to the ground or after hitting the ground. Those plays are now fumbles, a consequence some league observers were concerned about.

Whether or not it is directly related to the catch rule, fumbles are up this season. There have been a total of 297, an increase from 279 during the same period in 2017 and the highest nine-week total since 2012 (307).

Slight movement of ball allowed in a catch

To further clarify the new catch definition, the NFL made it clear to officials that the ball can move within a player's control during a legal completion. According to the league's case book, "If the ball moves within control of the receiver, he is deemed not to have lost control of the ball and it is a completed pass."

The most notable impetus came in Week 16 of the 2017 season, when Buffalo Bills receiver Kelvin Benjamin saw a touchdown reception reversed via replay. Benjamin first secured control, but the ball moved slightly before he got his second foot in bounds. By the time the ball stopped moving, Benjamin was out of bounds. That sequence would produce a legal catch and a touchdown in 2018 and beyond, but it should be noted this allows for only slight movement after possession has been accomplished.

Body weight into the QB

The hit that broke the collarbone of Green Bay Packers quarterback Aaron Rodgers has had a cascading effect on the 2018 season. It began with a point of emphasis on a narrow portion of roughing the passer, the prohibition against landing on a quarterback with all or most of a defender's body weight, and expanded into a further extensions of quarterback-protection rules.

Most notably, there were 34 flags thrown for roughing the passer in the first three weeks of the season. Miami Dolphins defensive end William Hayes even attributed his torn ACL to an awkward attempt to avoid landing on top of Oakland Raiders quarterback Derek Carr.

The pace slowed considerably after a competition committee clarification encouraged officials to penalize only when they saw the entire hit. There have been 30 such penalties over the ensuing six weeks.

But it's reasonable to believe that the early enforcement made defenders think twice before hitting the quarterback in the pocket. Kansas City Chiefs linebacker Breeland Speaks and Bills defensive end Jerry Hughes have both let quarterbacks go on would-be sacks, admitting they were afraid to finish the tackle in fear of getting a roughing-the-passer penalty. Many pass-rushers say they are now pursuing contact with the ball rather than the passer himself. Packers linebacker Clay Matthews said in September, "I just think somehow you need to program something in your head that when you're coming with those straight-on hits with the quarterback, to pick a side, maybe go after the ball."

A 4.9 percent decrease in scoring last season sent a fantasy/entertainment-driven league scrambling for answers. Among them: Officials had all but stopped throwing flags for illegal contact, which prohibits most types of contact by defenders against receivers before the ball is thrown. (Pass interference covers contact after the quarterback releases the ball.)

The competition committee ensured a turnaround by making illegal contact a point of emphasis, and through nine weeks, officials have called it more often (42) than they did for the entire 2017 season (38).

This season's total includes 31 in the first five weeks of the season, setting an early tone for how little defenders could get away with. It's hard to separate the illegal-contact emphasis with the record-setting start of offenses across the league, as offenses are averaging 24.0 points per game, up from 21.7 last season.

Ejections by the New York office

Owners approved two new ways for senior vice president of officiating Al Riveron to manage ejections, historically a discipline of last resort in the league. Riveron has the authority to add an ejection for a flagrant foul if a flag already has been thrown. He also reviews every ejection call -- a necessary backstop after the approval of the helmet rule -- to confirm whether it was appropriate.

We have seen one confirmed incident of Riveron ordering an ejection: Chiefs defensive lineman Chris Jones in Week 5, after Jones threw a punch during an extra-point attempt. There have been no ejections for the helmet rule, but overall the league has extended a 2017 trend of using them far more frequently.

Since the start of Week 9 last season, a span of 18 weeks, the league has ejected 23 players, including eight in 2018. There are no official historical records of NFL ejections, but according to the ESPN Stats & Information database, there haven't been more than 13 ejections in a 17-week season since at least 2001. At the very least, the NFL is ejecting players more often than at any point in the past two decades, a significant development when you consider the short, 16-game season relative to other sports.

A head-first slide is now the same thing as a feet-first slide for quarterbacks or any other player. The runner has given himself up, and the play is ruled dead the moment a knee, elbow or another body part touches the ground, regardless of whether the player has been touched by the defense.

On-field officials spoke openly this summer about the likelihood of marking the ball a yard or more behind where the runner's forward progress stopped. That hasn't happened often, at least in a consequential way, but it is a change to keep in mind if a quarterback dives across a goal line or for a first-down marker.

No PATs at the end of regulation

Teams are no longer required to kick a meaningless extra point, or kneel down, after a score on the final play of regulation. The situation hasn't arisen this season, and doesn't happen often. But it will clean up any repeats of the mess at the end of the 2017 NFC divisional playoff game at U.S. Bank Stadium, after the Minnesota Vikings' game-ending 61-yard touchdown play against the New Orleans Saints. The play put the Vikings ahead with no time remaining, but the teams were still required to reassemble for a PAT play. That's no longer necessary.