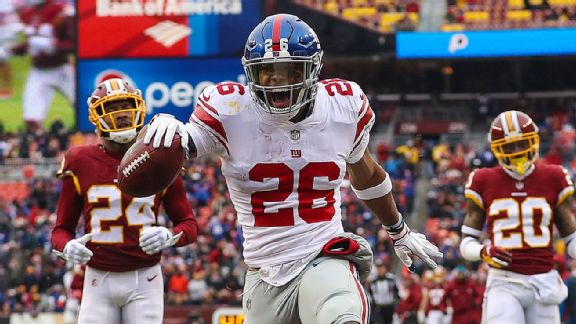 That may or may not happen, but Shepard wouldn't complain, not after catching a 49-yard touchdown pass from Beckham in a win over the Chicago Bears on Sunday.

That pass had the most air distance -- measured from the points of the throw to the catch -- of any touchdown thrown by a non-quarterback this season, according to NFL Next Gen Stats. It was 35th overall. Beckham's 57-yarder to Saquon Barkley in a Week 5 loss at Carolina ranks 56th overall and third among non-QBs.

Here is a look at the 2018 touchdowns with the most air distance, according to NFL Next Gen Stats, including two thrown by non-QBs.

Play: 47-yard TD to Brandin Cooks in Week 4 win over the Vikings.

Play: 39-yard TD to Geronimo Allison in Week 1 win over the Bears.

Josh Rosen to Christian Kirk. The future in Arizona?

Play: 75-yard TD to Kenny Stills in Week 1 win over the Titans.

Play: 64-yard TD to Emmanuel Sanders in Week 7 win over the Cardinals.

Didn't your grandmother tell you to stop flipping into end zones?!

We'll take it, though. 😎 pic.twitter.com/ZYpFAwOZhe

Play: 49-yard TD to Russell Shephard in Week 13 win over the Bears.

Play: 28-yard TD to Kenyon Drake in Week 8 loss to the Texans.