Two years ago, on the Monday before Thanksgiving, families across the United States gathered to watch two of the highest-scoring offenses in NFL history on Monday Night Football.

The game did not disappoint, as Jared Goff and the Los Angeles Rams and Patrick Mahomes and the Kansas City Chiefs squared off in the shootout. It ended up being the first game in league history in which both teams topped 50 points.

On Monday at 8 p.m. ET, ESPN and the NFL will begin a partnership in airing Monday Night Football Classics. The event will last five weeks and begin with 2018 Chiefs-Rams shootout. The evening begins with episodes of Peyton’s Places, future Hall of Famer Peyton Manning's tribute to the NFL's 100th season, at 7 p.m. ET.

Barnwell: We just watched the greatest regular-season NFL game ever 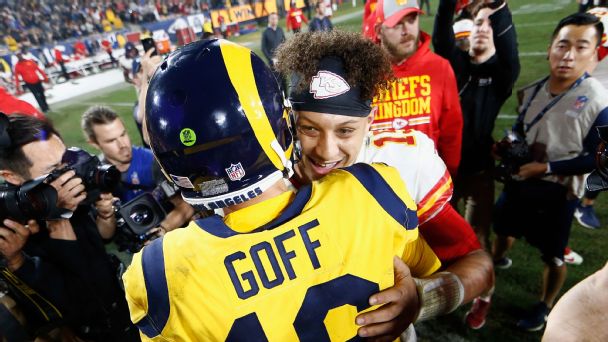 ESPN, in partnership with the NFL, presents some of the greatest MNF games in history. (All games begin at 8 p.m. ET)

If you missed Chiefs-Rams the first time it aired, you are in for treat. Here are some highlights of the offensive display: