SANTA CLARA, Calif. -- Let there be no doubt: George Kittle will soon become the highest-paid tight end in the history of the NFL.

With free agency and the NFL draft in the rearview, the San Francisco 49ers' attention has now turned to ensuring Kittle will remain a franchise focal point for the long term.

"George is a huge part of this organization," general manager John Lynch told KGMZ-FM 95.7 The Game on April 30. "George isn't going anywhere. We're going to work hard to try to get it done. I think they've got motivation just to reset the tight end market, as do we for him. It's just finding that sweet spot, where that is. ... When that happens, I don't know. But we're working hard, as are they, to try to make that happen. George is going to be a part of the 49ers for a long, long time."

Under normal circumstances, the 49ers could examine the top tight end contracts in the league, come up with a number above it and the deal likely would be done before Kittle, 26, becomes a free agent in 2021. But Kittle is far from being a normal tight end. His value as a pass-catcher and a blocker makes him one of the league's most unique offensive weapons.

Since entering the league in 2017, Kittle has 2,945 receiving yards, the most by a tight end during his first three seasons in NFL history. Over the past two seasons, Kittle's 2,430 receiving yards ranks sixth in the NFL among all pass-catchers, his 173 receptions is 11th and his 1,464 yards after the catch is second.

ESPN NFL front office insider Mike Tannenbaum, who worked as general manager of the New York Jets and executive vice president for the Miami Dolphins, said all of that adds up to a contract that will blow away any deal a tight end has ever signed.

"What's amazing about him is what he does in the running game," Tannenbaum said. "He's a dominant blocker and he's been dynamic in the passing game. He's a rare weapon that I think is more valuable than just a regular tight end because he can block so effectively."

At this point, the question isn't so much whether the 49ers star will surpass other well-compensated tight ends but to what extent?

What Could Kittle Make? 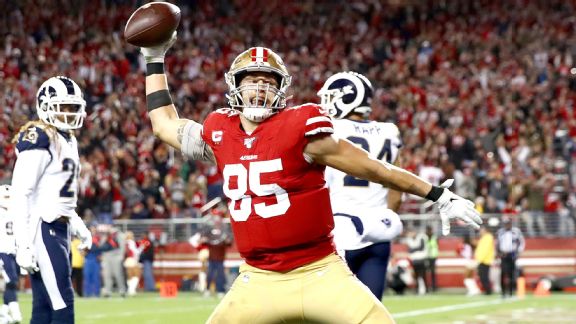 Here's a list of the NFL's highest-paid non-QB offensive skill-position players based on the annual average value of their contracts. This is the range George Kittle could be looking at for his next deal:

In March, former Falcons tight end Austin Hooper signed a four-year, $42 million deal with the Cleveland Browns. The deal is the largest long-term contract for a current tight end, though the Chargers' Hunter Henry will make $10,607,000 in 2020 on the franchise tag.

While both are good players, neither Hooper nor Henry approaches Kittle's versatility and overall value, which means the Niners will have to go above and beyond to get a contract done.

"I would certainly say it's probably toward the upper end of where the wide receivers are just from a standpoint of he's a dominant offensive player," Tannenbaum said. "You look at what a guy like Christian McCaffrey got, I think that's much more in the ballpark from the standpoint of you don't just label Christian McCaffrey a running back. I don't think you just label George Kittle a tight end."

In April, McCaffrey signed a four-year, $64 million extension with the Carolina Panthers. That deal included about $30 million in full guarantees with another $8 million guaranteed next March, bringing the total likely guaranteed to about $38 million.

The top of the wide receiver market falls into a similar range. Houston's Brandin Cooks, Minnesota's Adam Thielen and Arizona's DeAndre Hopkins all have deals that pay them an average of $16.2 million per season. Only seven receivers make more than that trio, with Julio Jones leading the way at $22 million a year.

Something in the range of a four-year, $68 million to $72 million deal with about $40 million in guarantees would seem to be the "sweet spot" to which Lynch is referring.

"When you've got someone of George's ability, you prioritize that," Tannenbaum said. "He's such a transcendent player. ... You just have to sit down with your head coach and your owner and say, 'There's going to be a significant premium paid for this player and we have to figure out where we're going to get it from.' It may be the guard, it may be the third linebacker, but let's all just agree that we're going to have to take it from somewhere because this is such a good player. It's a no-brainer to get Kittle signed to an extension; it's just about making sure we understand how we fit everyone else around him."

Another potential holdup is future salary-cap uncertainty because of the coronavirus pandemic. The cap was expected to surge in 2021 and beyond with new television deals on the way. But if the 2020 season goes on without fans in the stands, the loss of revenue could alter things.

Of course, the 49ers could always wait it out and use the tag to ensure Kittle doesn't leave. While it's unknown exactly what the franchise tag numbers for next year and beyond will be because of the cap uncertainty, something like $11 million next season, $13.2 million in 2022 and nearly $16 million in 2023, for a total of about $40 million over three years of tags, could be the price.

That's a less expensive approach financially but could cost more in terms of how not paying someone like Kittle his worth would be viewed in the locker room.

"While you certainly have the right to franchise a player, it doesn't come without consequence, either," Tannenbaum said. "Sometimes you can win the battle and lose the war when you use the tag."

The 49ers want to keep Kittle and Kittle wants to stay. Although he declined to answer contract questions at the end of the season, he has been participating in the virtual offseason program.

On a post-Super Bowl trip to Mexico, where coach Kyle Shanahan and his family also were, Kittle did let it slip that he has no designs on going anywhere.

"He told my wife that, how much he liked it here and he told my wife to promise not to tell me until after he signed," Shanahan said, laughing. "She told me. She's my wife, so ..."