If you are somewhere near Santa Barbara, California, in the next month and you see a football player in a park or on a field in a Dallas Cowboys helmet, it could be linebacker Sean Lee.

The Cowboys' offseason program -- virtual from the beginning to the end because of the coronavirus pandemic -- is over and players do not have to report back to The Star until July, but for Lee, who is entering his 11th year with the organization, it never really ends.

He will turn 34 on July 22 and understands there is only so much time left for him in the NFL. 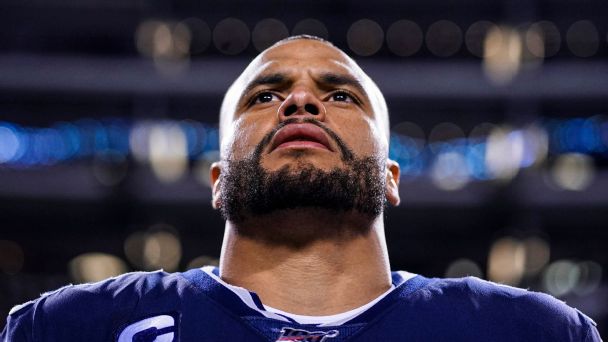 "You feel like the old man when you realize some of these mid-, late-'90s birthdays of the guys you're playing with," Lee said. "It does keep you young. But I'm as excited as I've ever been and love the game as much as I ever loved it. It's good. It gives you a sense of urgency that you only have so many shots to win a championship. When you get near the end and don't have that championship, you feel that more than ever."

Lee is a creature of habit. Each day has a plan. Each hour has a theme. Each minute has an exercise. They are all designed to keep him healthy and strong, with the idea being he would be at his best whenever the regular season starts.

In a normal offseason, Lee would have been at The Star more than a month before the official start of the offseason program. Because of a late-season injury from 2019, he was at the facility for rehab and some training under league rules, but a lot of the work he has put in has been on his own.

"I had to jump a couple fences to get on some different places," Lee said of working through linebacker drills in various locales.

"I kind of stayed on the same schedule. I wouldn't run as much early on, but then closer to the OTAs, I would gear up my running toward what it would be like during those OTAs and then for what it would be like going into a minicamp. It's like approaching each segment of the offseason like always, and now going into the summer, it's getting ready for training camp."

In some ways, this NFL offseason has been similar to the 2011 offseason when there was a lockout.

Back then, Lee was heading into his second season with a new head coach in Jason Garrett, who landed the permanent gig after taking over for Wade Phillips in the middle of the 2010 season, and needing to learn a different defense with Rob Ryan hired as coordinator.

Unable to communicate with Cowboys coaches or meet with the strength staff, many players gathered at Dragon Stadium in Southlake, Texas, for group workouts.

"To me, that was more challenging," Lee said. "We did a good job meeting up, working out together, but we got to July and we didn't know what was going to happen. Then all of a sudden we were told within a week to go to training camp."

Nine years later, Lee is having to learn a new coach in Mike McCarthy, a new defense with coordinator Mike Nolan and a slightly altered workout program, although new strength coach Markus Paul, who worked with Mike Woicik last season, maintained at least a portion of it.

"Because we've spent a lot of time interacting with the coaches, learning the defense while transitioning to a new staff, it's been extremely helpful," Lee said.

"That's the toughest part, not being around the guys and building that bond that you work on from March to now," Lee said. "The shared sacrifice of lifting and running together and kind of growing closer over time with hard work."

Every team has had to deal with that circumstance, but Lee said the defensive players have held separate Zoom calls on their own or had group text exchanges in discussing the ins and outs of what to expect whenever they can get on the field.

"Mentally, we've been able to do some incredible work and still learn even if physically we've not been able to be around each other," Lee said.

After the 2020 NFL draft, McCarthy acknowledged he is behind in implementing his system. Lee feels the same way as he gets ready for 2020.

"Yeah, there's probably an insecurity that you feel that way, but you've got to combat that with an extreme sense of urgency," Lee said. "With your work ethic, how you study, all of that. I want to be prepared. I want it to be where if we're called tomorrow and they say, 'We're going to work,' then I'm ready."

Which is why you'll find Lee at some park or in some field, wearing a Cowboys helmet, going through workouts by himself.